Students revved up for the game at rallies 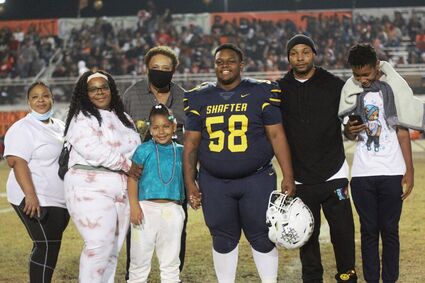 "O" Tatum and his family at mid-field on Senior Night.

The Shafter/Wasco Rivalry, one of the oldest and fiercest in the county, resumed last week as the schools went head-to-head on the football field Friday.

Before the game, students held rallies to build school spirit.

The rivalry was on hiatus last year because of the health and safety restrictions, but the rivalry picked up without missing a beat this year.

The Generals had different Dress Up Days during the week, including one day in which they dressed up like their best Rose Queen.

On Friday Shafter High hosted the Tigers' players, cheerleaders, and ASB officers for the traditional breakfast. Usually, the hosts allow the visitors to eat first, but the Generals were forced to begin breakfast when Wasco didn't arrive until 8:30 a.m. After the breakfast, it was time for the Exchange Rally. The mood was raucous as the Generals chanted their way through the morning. There was also the traditional introduction of the players, which had the hosts cheering.

The cheerleading squads from both teams performed to applause.

As the rally ended, the Shafter contingent loaded up for the trip north to Wasco High, where they attended the rally in Tigers territory.

The rally at Wasco was jam-packed. Athletic and Activities Director Joshua Huddleston welcomed everyone to the outdoor rally. A lot of chanting and yelling for the Tigers drowned out the street noise. Wasco introduced a video skit of Jumanji, which included special effects for the game players to immediately disappear and reappear on different parts of the campus. 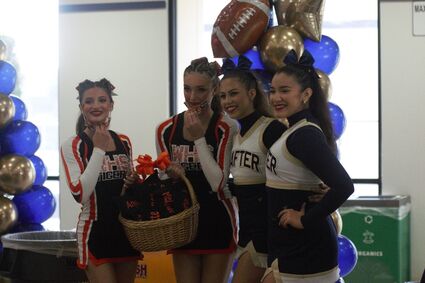 With the addition of new AV equipment the skit was loud enough for everyone to hear. Wasco cheerleaders ran onto the field and performed one of their routines with a number of lifts and tosses.

The Shafter High cheerleaders then performed their routine to a warm welcome from the Wasco students.

Wasco gained bragging rights for a year with the victory on Friday night. When Wasco was ahead two touchdowns, there was a sigh of relief from the Wasco faithful. When Shafter scored its second touchdown, some Wasco fans were worried that the game might slip away, but the Tigers righted the ship and cruised to the victory in the fourth quarter.

Wasco will now take on Centennial in the first round of the playoffs, while the Generals will host the Cowboys of Riverdale.