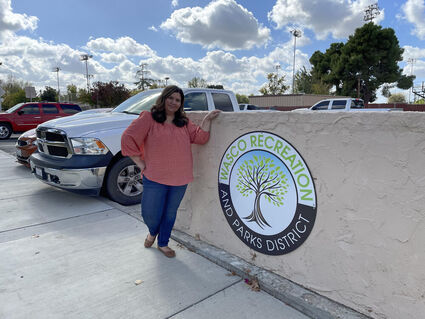 Chris Serna needs no introduction to the residents of Wasco because she's been employed by the Recreation and Parks District for the past 18 years. Now she is the new district manager.

Even though she is a Shafter resident, she has been employed in Wasco for the past 30 years.

Serna was previously the Wasco Recreation and Parks District secretary and knows the ins and outs of the department.

During rival game time, she roots for both teams as she shares a love for her adopted city of Wasco as well as her hometown of Shafter.

"I enjoy the rivalry," Serna said. "I have a lot of connections in both cities."

In addition to her new position, she is also enrolled at Bakersfield College and is excited about furthering her education. In addition to working full time, she is currently enrolled in two classes.

Prior to working for the district, Serna was employed at St. John's Catholic School for eight years. She also has two college-age students and an eighth grader who attends Grow Academy (Grimmway).

Serna is excited to continue with several district projects that were started before her promotion because she has been working on many of them in her previous position.

At the present time, the district is still waiting to hear about a grant they applied for beautifying Cormack Park.

"We are also waiting to hear about a grant we applied to for the pool," Serna said.

Serna also said that the district was looking into creating a green belt, which would be available for activities such as T ball, kickball, football and soccer.

"We are also working on adding lights to Annin Park," she said.

"We are so lucky to have partnerships with several different organizations and companies that continue to help the district with projects," Serna said.

At the present time, the parks are open for visitors. Next year they hope to be able to have more activities with the hope that the pandemic is over.

"We were lucky to have swimming this past summer, which included competitive swimming by our Tigersharks and free swim in the evenings," Serna said. "We follow all the state and county guidelines for safety."