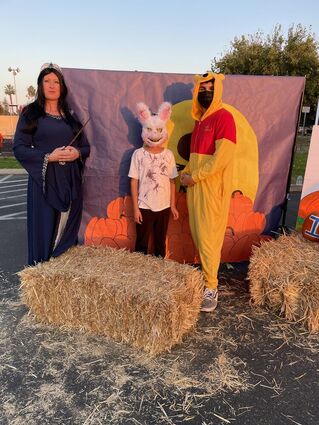 Kayla Castillo in a costume from Harry Potter dressed up for Trunk or Treat.

Many families began arriving at Barker Park on Oct. 28 well before 6 p.m. when the park's Trunk or Treat was officially to begin.

A multitude of kids with parents snaked around Poplar all the way to Poso by the time the event officially started.

"We ran out of candy by 7 p.m." Wasco Woman's Club member Jill Drescher said. "There were so many people at the park." 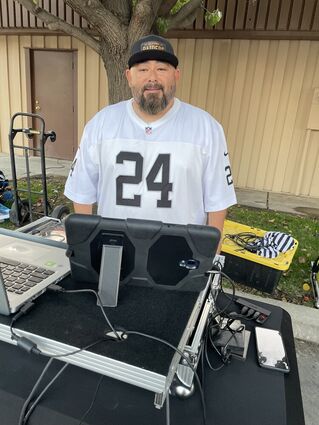 The DJ played music as everyone entered the park.

Sgt. Peter Martinez was there because this was an event he had previously signed up for before he left the Wasco Substation and he was surrounded by kids of all ages as he joked with everyone who approached him.

The evening was fun for everyone as little ones ran around holding up their bags or buckets collecting candy while the adults visited with friends, neighbors and coworkers.

Witches, ghouls and Spiderman made it to the big party. The pumpkin headed character from the movie Trick or Treat showed up in a couple of sizes. When the young character showed up, he was asked if he had seen the movie. His mother laughed and said she didn't know he had seen it. But the costume was clever.

Minnie Mouse and a carefully crafted clown with a red wig joined in the festivities.

Minnie Mouse sisters dressed alike, but one was in pink with glittery eye makeup and her younger sister was in a red costume.