'A Christmas with CS Lewis' coming to Ford Theater in November 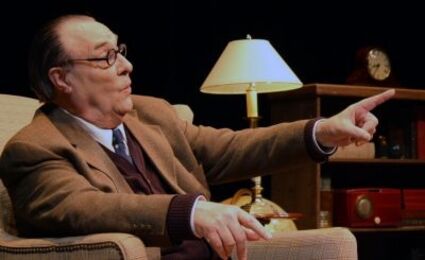 David Payne performs in "An Evening with CS Lewis," at the Shafter Colours Festival.

David Payne will be presenting his production of "A Christmas with CS Lewis" Nov. 26-28 at the Ford Theater in Shafter.

Payne began his relationship with the author years ago when he saw a flyer asking for actors to audition for the role of CS Lewis in a play in the United States.

"British accents a help," the advertisement read. A bit bored, a bit intrigued, and with no hope of getting anything more than a walk-on role, Payne scooted along to the audition....just to see what might happen.

Well as it turned out, a lot happened. Since landing the role of CS Lewis in that original play, Payne has become the world's foremost actor in the world of Lewis. He has performed as CS Lewis in more than 1,000 productions, in front of nearly 750,000 people. Requests for his show, An Evening with CS Lewis, come from all over the world, although he has mainly restricted his performances to the US, the UK, and Canada.

"Never in a million years did I think I would ever be a performer on stage," he said from his dressing room in Chicago's Broadway Theatre. "And never did I think that I would enjoy it so very, very much."

Throughout the entire 90 minutes, audience members feel as if they're in the presence of the author, scholar, and humorist as Payne completely embodies the role.

At the Colours Festivals in two previous seasons in Shafter, Payne performed "An Evening with CS Lewis," as well as "Weep for Joy," a production that depicted the relationship of Lewis with his dying wife, Joy.

In this coming production, "A Christmas with CS Lewis," Payne brings to life the beliefs of Lewis, after a chance encounter with noted author JRR Tolkien, of "Lord of the Rings" fame.

In the early years of his young adult life, Lewis believed the story of Christ's birth was nothing more than a feel-good myth.

That all changed after the encounter with Tolkien. Although both men loved mythology in general, Tolkien was convinced that the Jesus myth was the one true myth. That was the start of Lewis' journey from Atheism to Christianity. From that point on, Christmas for Lewis took on an entirely different meaning.

Here we find him at his home near Oxford on Christmas Eve hosting a group of Americans who are Christmassing in England. They are about to experience an unforgettable assortment of Yuletide recollections which stimulates a whole range of emotions- curiosity, laughter, gladness and even some tears. Above all, they will discover how that encounter with Tolkien forever changed his Christmas celebrations.

The Ford Theater is offering group discounts to the local churches for $15 a ticket for 10 or more people. Contact Venessa Givens at 661-630-4059 for ticket purchases and details.