Local veterans take the trip of a lifetime 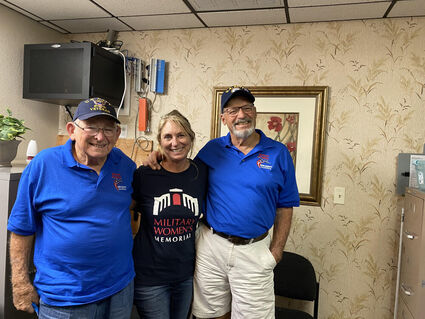 Two local veterans joined about 170 other veterans on a recent Honor Flight to the nation's capitol, where they took in all of the memorials and monuments, and likely garnered memories that will last a lifetime.

John Enns and Bob Reeves spent Sept. 14-16 in Washington, D.C., visiting landmarks that they had thought they might never see. "This was an amazing trip, one that I will never forget," said Reeves, who served in the United States Navy in the 50s and the 60s. Reeves served in the Korean War and the Vietnam War. He was on a troop transport ship stationed in Japan that would carry soldiers on their R&R trips.

Reeves was accompanied on the trip by guardian Art Soliz. The trip was free for the veterans, with a charge for the guardians. "But it was well worth it," said Stacy Enns, guardian for John Enns on the trip. "It was amazing to see how big the memorials are," said Stacy Enns. "I loved every part of the trip. It was so well organized and we had a chance to see so much in such a short amount of time."

They were able to visit the Korean, Vietnam, and World War II memorials. They also visited the Arlington Cemetery, and watched the Changing of the Guard at the Tomb of the Unknown Soldier. The veterans were also honored at a dinner one evening, receiving medals and awards from several different people. Reeves and Enns received flags that had been flown over the Capitol, given to them by Kevin McCarthy, House Republican leader. 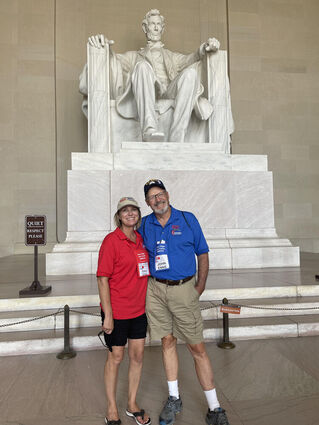 Stacy and John Enns at the Lincoln Memorial.

There was also a special mail call on their flight home. Unbeknownst to the veterans, each vet had a bag of mail to open. Reeves and Enns had letters from old friends, a card from the City of Shafter, and letters from the local elementary schools. "I want to thank the city of Shafter, the elementary schools, the high school, everyone who made this trip so special. I will never forget it," said Reeves.

Enns said that the trip holds a special place in his heart because of the welcome they received throughout the trip. "It is so different than the reception we got the first time when we returned from Vietnam," said Enns.

Enns also mentioned that everyone was so helpful and informative. "Our driver was great, and the whole organization was just amazing, having everything so well organized," said Enns.

Reeves said that he encourages any veteran that has a chance to go on an Honor Flight, to go. "You have to be vaccinated to go on the trip, but it is well worth it. This was truly a trip of a lifetime."