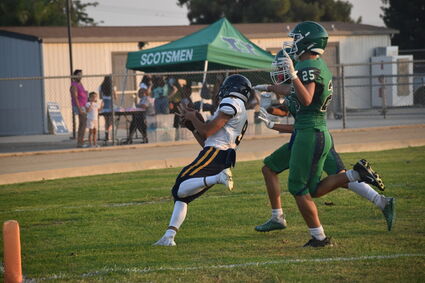 The Shafter High Generals dropped their matchup with the Highland Scots on Friday night, 20-13. For the second straight week, the Generals failed to capitalize on scoring opportunities in the first half, coming away with only one score, trailing at halftime 12-6. The challenge was made even harder in the second half, when quarterback Tyson Dozhier was injured as he was playing on defense, suffering a broken collarbone.

Shafter started quickly on their first drive of the game, marching down the field on runs from Elijah Lucero and Dozhier, culminating in a 4-yard score by Lucero. Highland answered back with a long pass play, giving them a first and goal at Shafter's 8-yard-line. The Scots scored to tie the game up.

After that first drive, Shafter had trouble sustaining a drive, being hurt by penalties and mistakes. The backs and receivers missed some key blocking assignments and Dozhier's timing was off and he had a severe case of "happy feet," making it impossible for him to stay in the pocket and find open receivers.

The Generals were about to score again when Dozhier fumbled the ball right before crossing the goal line, with the Scots recovering the ball in the end zone. Shafter had another opportunity slip away when Dozhier was intercepted deep in Scots territory.

There was a 12 point turnaround right before halftime when Shafter was driving down the field. The Generals fumbled the ball with 20 seconds to go in the half, with Highland scooping up the ball and rambling into the end zone, giving them their lead going into the locker room.

The Generals' troubles on offense continued early in the second half when Dozhier went down with his injury. Devon Dundgren came in to take over at quarterback and gave the Generals a spark, scrambling deep in the Shafter end of the field. Sundgren eluded several Scot tacklers and scampered 89 yards for a touchdown, giving the Generals a 13-12 lead.

Unfortunately, the Generals' defense wore down in the second half, unable to stop the Scots running game, with Highland able to get big chunks of yardage and pick up key first downs, even when forced into third and long situations. 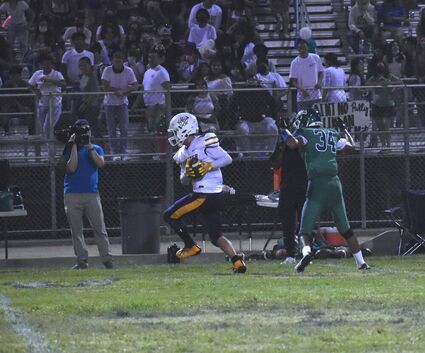 Tyson Dozhier sacks the Scots' quarterback for a big loss.

The Scots took the lead back early in the fourth quarter, 20-13. The Generals were unable to mount another serious drive, hurt by a few key penalties and miscues. The Generals played a tough Highland team, who had dismantled the Arvin Bears in Week 1, and could have won the game were it not for a few mistakes on both sides of the ball.

Shafter will take on Mira Monte High School on Friday night, looking to get its first win on the board in the young season. With a full week of Sundgren at the helm, the Generals will have a chance to get a game plan in place for the victory.

The Generals' game followed a very entertaining game on the junior varsity side, with the Colonels dropping a heartbreaker to the Scots by a 26-18 score. The game saw both teams able to move the ball up the field, trading blows throughout the game, with the Scots answering back every time Shafter made a run to tie the score.