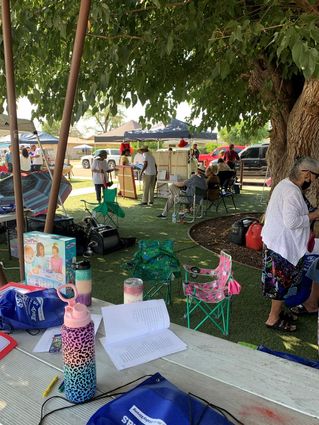 The park was crowded all afternoon with attendees enjoying the event and food.

The name Juneteenth has been spoken a lot in 2021.

It's called Freedom Day, Jubilee Day, Liberation Day and Emancipation Day by many and the day commemorates the end of slavery in the United States. It is a day of liberty and a day to recommit to ending systematic racism in America. Now it is a federal holiday.

This year, Wasco celebrated with a party in The Park on 15th and G Street beginning at 10 a.m. and lasting into the afternoon. Speakers and special guests were seated underneath canopies while attendees gathered around the perimeter.

Vendors were on site selling different food items, to over 100 attendees who braved the heat to listen to speeches, gospel singing and recognition of local Black educators.

Assembly member Rudy Salas was one of the guest speakers to address the attendees.

"This celebration is in hopes of making things better for African Americans in the country," Salas said. "Throughout the United States as well."

Salas urged everyone to be people of valor and liberty.

Salas presented a proclamation to the three Baptist churches that helped plan the event. 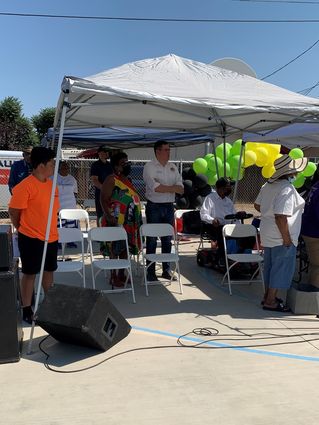 Principal of Teresa Burke Monique Goodwill also addressed the attendees, saying how proud she was that the city was recognizing this important day.

Mayor Alex Garcia addressed the attendees and said he had spoken to former Wasco Baseball Hall of Famer Art Demery's family and would like to recommend to the City Council that the ballpark be named after Demery. He is planning on bringing this up to the members at the next regular council meeting.

"Saturday was a profoundly historic day for Black families in Wasco, and communities around the nation," Garcia said. "Despite the turbulent times we live in, Juneteenth this year struck hope in my heart and reminds us all of the work yet to be accomplished."