Generals celebrate the end of their high school careers 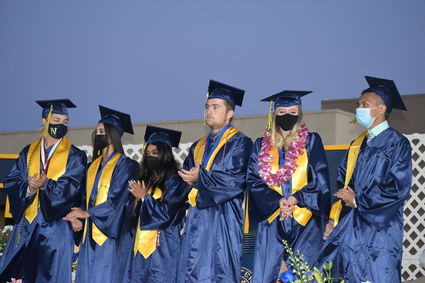 The commencement began with a welcome by Principal Russell Shipley, who told the attendees, "I am so proud to have this class graduating on the Shafter High campus, after the momentous challenges they have faced in the past couple of years."

This year's graduating class was one of the biggest in history, with a total of 370 students receiving their diplomas.

One of the speakers was ASB President Nick Aguirre, who spoke about the experiences they have had in the past year.

"We lost a lot in our high school careers this past year, like our Shafter vs. Wasco rivalry game, school dances, and just seeing our friends in the halls," Aguirre said. "We can be proud of the way that we handled the challenges and obstacles put in front of us."

Another speaker was Yesenia Gil, who spoke of how their class thrived in the face of adversity and will now go their separate ways to put their footprint on the world.

Cindy Torres was the final student speaker of the evening, as she recounted a number of humorous tales of her and her friends as they navigated their way from nervous and shy freshmen to mature seniors who are now ready to go out into the world.

"Some of us will go on to college, some will enter the work force and all of us will remember what has made us the people that we have become. Most importantly, we know that old saying, Once a General, Always a General," Torres said.

This year, Shafter High had 47 students who were named a CSF Life Member. This is one of the largest total of members in one class. 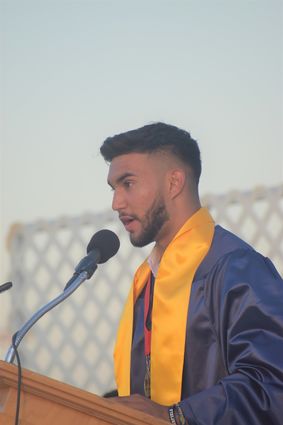 ASB President Nick Aguirre speaks to his fellow classmates and family and friends.

One of the highlights of the evening was the announcement of the top performers in the class. The fourth highest GPA, with a 4.392, was Jensen Boyt. Boyt will be attending the Naval Academy in Annapolis, Maryland in the fall.

There was a tie for the second highest GPA, with both students having a 4.469 GPA. They were Evelyn Ruldan Bustamante and Aaron Millwee.

There were two students who ended their high school careers with a perfect 4.5000 GPA. Juliana May Bush, who was technically a junior in high school, also took all Advanced Classes and took several college courses, so she is near an Associate's degree. The other student with a perfect 4.5000 GPA was Leonel Avalos. The GPAs of all the students were grades that they received beginning in their sophomore years.