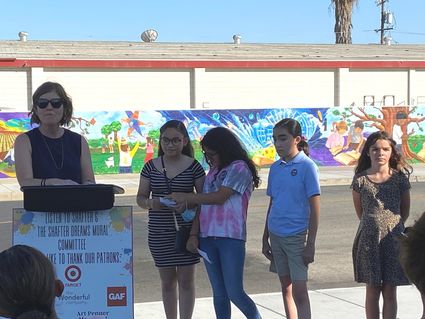 Katie Wiebe, of Listen to Shafter, speaks about the work done by the students Alondra Montalvo, Khloe Verdugo, Seniya Schluter and Sierra Albiar.

A wall across from the Shafter Learning Center is blank no more after the ribbon was officially cut on the new mural, a project that began with a group of students dreaming about what it could be.

In October 2019, while attending a Fall Break Literature Class at the Shafter Learning Center, Alondra Montalvo, Sierra Albiar, Khloe Verdugo, Seniya Schluter, and Brinlee Swann noticed a blank wall located diagonally across from the center. They thought, "this wall needs some art."

They began to dream about the possibility of a mural at that location. Working together with Listen to Shafter, the students brainstormed design ideas, advocated for the project, and helped select the artist.

The group of students went before the City Council for approval of the project. They worked with the Kern Art Council, who assisted in the search for a local artist. There were five different submissions from local artists and muralist Lorena Castillo was selected.

Castillo, who had moved to Shafter three years ago, had experience painting murals up in Watsonville, where she had moved from.

"I didn't think that I would ever paint another mural, but this project touched my heart, and I wanted to be a part of these young girls' dream," said Castillo.

Castillo received help from the group of students, as well as other volunteers.

The mural is titled, "A Wall of Dreams," and depicts dreams and hopes that are in the minds of local youth, from science and math, to art, sports, and possible careers.

Katie Wiebe, of Listen to Shafter, was the emcee for the ribbon cutting event, and said that the project was a true community effort, but began with the dream of the group of girls.

"These girls had a dream and worked so hard to realize it," Wiebe said. "From the presentation to the City Council, the selection of the artist, to helping actually paint the mural, these girls learned what is possible when you dream big, and work for that dream."