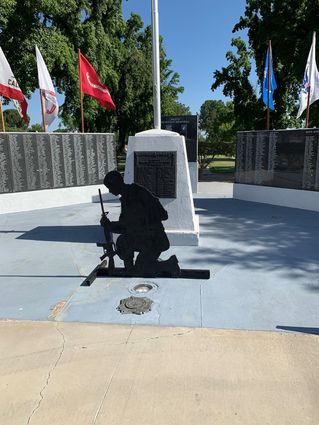 Markers list the names of Wasco veterans who died in action.

While there was nothing officially planned for the Wasco Cemetery on Memorial Day, the Shafter/Wasco VFW Post 6742 continued its tradition of decorating and greeting guests. 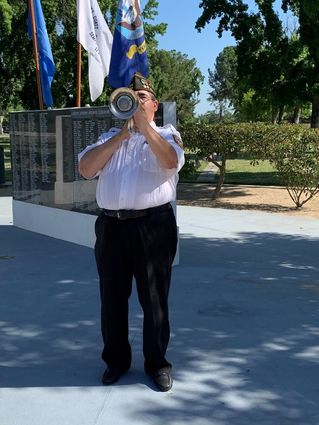 Gravesites were decorated with small flags that had been placed on each grave by cemetery Grounds Supervisor Denny Carender and grounds employees.

Due to the pandemic, the cemetery district decided that there would not be a ceremony at the Wasco Cemetery.

Wasco VFW members Camilo Vasquez, James Madrone, Tony Stout and Steven Smith were available to greet visitors who stopped by to pay their respects to fallen veterans they knew.

The local VFW members kept a watchful eye on the grounds as visitors trickled in. Some placed flowers on gravesites while others stopped to chat with the men.

Commander James Madrono described how worn-out flags are burned in a flag-burning ceremony and said that the Wasco Woman's Club cut all the stars off the old flags, packaged and labeled them for tokens whenever there is a Memorial Day ceremony.