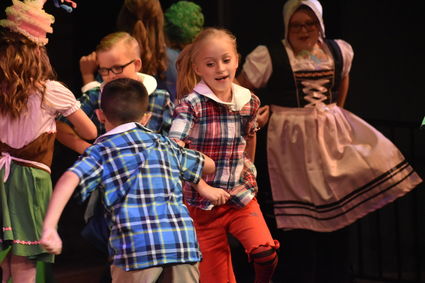 Actors from the Shafter Children's Theater played the munchkins in the production.

The Shafter Young Adult Theater opened their production on Friday night with a packed house in their performance of The Wizard of Oz.

Playing the role of Dorothy, Lauren Givens showed a great range vocally, emotionally, and played the title lead character with a powerhouse performance.

Givens was surrounded by a multitude of talented actors who all shone in their own right.

Megan Bloehmof, who wowed crowds as Annie a couple of years ago, was fantastic as the Scarecrow, showing agility, great timing, and a quick wit.

Chewing up the scenery in a delightful way, Matthew Maldonado was hilarious as the Cowardly Lion. Playing on the crowd's sympathies, Daelyn Smith made the Tin Man a character that you couldn't help but root for.

The play was dotted throughout with some hilarious dialogue by some characters, including Joshua Cooley, who stole almost every scene he was in with a natural timing and emoting that made his characters, Uncle Henry and the Emerald City Guard, perfect comic relief.

One of the highlights of the Wizard of Oz is the Wicked Witch of the West. This role invites the actor to play it to the hilt, and Emily McGuire does just that, making it a joy to root against her at every turn. You just love to hate her, but with a smile on your face the entire time.

The role of Mrs. Gulch was also played perfectly by Jayna Pierucci. 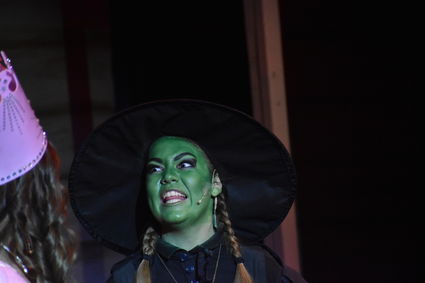 Emily McGuire was wonderfully evil as the Wicked Witch of the West.

Making the production special was the accompanying orchestra for the show. Filled with a lot of junior high and high school musicians, this community-wide effort gave the production an energy that you can't get with a recorded soundtrack. Led by Richland Junior High Music Director and including Shafter High Music Director Phillip Bustamante, the ensemble was terrific.

Leading the production was Director Chad Givens, who had Choreographer Roya Eubanks and a host of volunteers in the technical crew who completed one of the stage's most challenging productions when it comes to effects, set design, and lighting.

Helping out the Young Adult Theater group also was several children from the Shafter Children's Summer Theater. These children played the parts of the Munchkins.