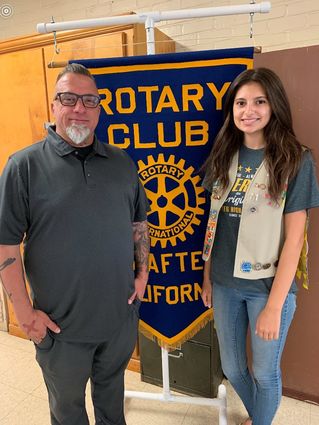 A local Girl Scout is spreading awareness of human trafficking as part of her Gold Award.

Camacho was looking for a community project to create in order to receive her Gold Award in the Girl Scouts organization. The project includes tackling an issue that can change lives and serve the community.

Human trafficking has become prevalent in Kern County, Camacho explained, with several local arrests of people who were involved in human trafficking rings that would transport young girls and boys around the state and country, making them work as sex workers.

Camacho contacted Bennett, who runs Magdalene Hope. Camacho then organized a group that would hold meetings to raise awareness about this issue that can hit any family - no matter the economic background of the victims.

Bennett and Camacho told the Rotary Club about the different ways that the traffickers can lure their prey in and how they assert their influence on them.

With the growing popularity of the internet, the traffickers take advantage to grow their groups. Traffickers often make it look like an innocent or blind friendship that is developed online, paying their victims compliments and asking them personal questions. After gaining the victims' trust, they often start applying pressure on the victims to share pictures, eventually wanting to arrange to meet in person.

Bennett advised parents to keep track of what sites their children are going to on the internet and also what accounts they may have, such as Facebook or Instagram, which can be tools used against them.

Sadly, Camacho said, sometimes it is not just the children being lured unaware from their families. Sometimes it is the families themselves that are selling their children to repay debts, or for drugs or other reasons.

They advised people who are suspicious of this sort of activity going on to speak up.

"You need to tell someone if you suspect that there is an issue of human trafficking. You can call the police; they are your friends and can help. You can also contact the National Human Trafficking hotline, who will connect you to an organization that can help get them to safety," Camacho said.

Once Camacho completes her project, she will receive the Gold Award, which is the highest award attainable in the Girl Scouts organization. It takes an average of 80 hours to complete.