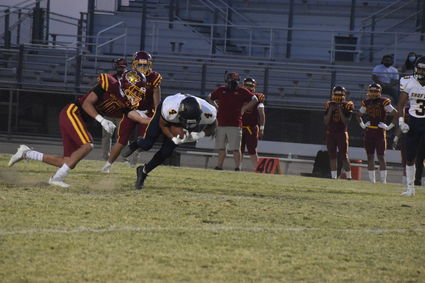 The Shafter High Generals proved on Friday night that they are able to step up and win even when they are not at the top of their game.

Against the Lions of Mira Monte, the Generals' offense started off slowly, misfiring more than their three previous games. Shafter found a way to step up their game and win with a score of 43-6.

Led by quarterback Tyson Dozier, the Generals opened the scoring with a keeper by Dozier of 10 yards. This was after a 65-yard run was called back on a holding call.

The Generals' defense came up big early by forcing a turnover that gave the offense the ball deep in Lions' territory. The drive ended with a 27 yard field goal, upping the Generals' lead to 10-0.

Late in the second quarter, another Generals' drive was aided by a couple of big runs by transfer Walker Murphy, who bulldozed a few Lions on his way to a total of 58 yards on the drive. This set up another touchdown by Dozier, giving the Generals a 16-0 lead.

Shafter's defense had one of their few weak series in the game during Mira Monte's drive, allowing a big pass play that set up a short touchdown run, closing the gap to 16-6. This would be the only serious drive that the Generals' defense would give to the Lions, shutting them down the rest of the way.

The defense got in on the scoring when Joey Sanchez picked up a loose ball and rambled 48 yards for a touchdown, stretching the Generals' lead.

With transfer Cameron Huerta having a relatively quiet night, the Generals had ample support to aid in the effort by Nick Aguirre, who grabbed a couple of key passes, as well as the running of Murphy. 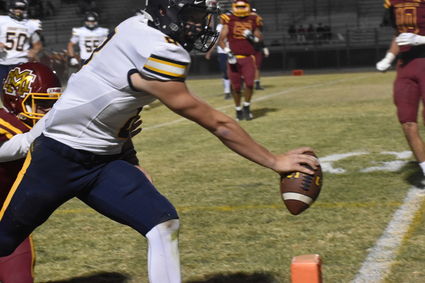 Tyson Dozier gets the ball to the one-foot line from the goal.

Unlike their previous games, the Generals proved that they don't have to show their big play, quick-striking offense to be successful. Against the Lions, they played a ball control offense that effectively kept the Lions' offense off the field and ate up chunks of the clock with time consuming drives that gave the Generals' defense a lot of rest for the remainder of the game.

The Generals did have a big play late in the game when they used a quick pass to Huerta who broke out for his biggest gain of the night. This was followed by another touchdown by Dozier.

The Generals will play the undefeated Golden Valley Bulldogs on Friday. The winner of this next game will go against the top team from the other side of the division to end the season.