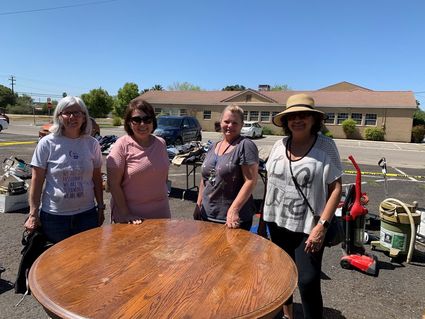 The community came out and bought plenty at the Wasco Woman's Club Rummage Sale.

The annual sale was back this year after being canceled in 2020 due to the pandemic.

Garages were filling up, guestrooms were piling up with items and still the women continued their quest for unusual items after being closed in for a year.

The Woman's Club headquarters on 7th Street was brimming with holiday decorations and the backyard was filled with clothing and shoes. The clubhouse had several tables of dishware and a couple of tables of crystal and silver. There were decorative pillows filling up a table along with knick knacks for the collector. 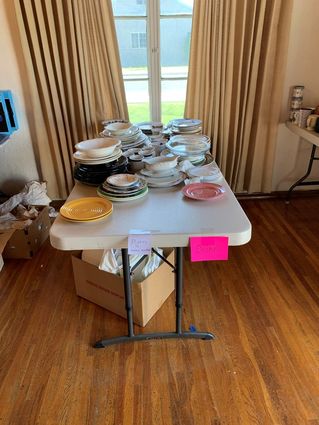 The dish table was picked clean early on Friday morning.

A Coca Cola dinner set for eight was claimed and purchased by a club member before the set could be put out for sale.

A couple of couches, desks, file cabinets, chairs and tools were displayed in the parking lot alongside of Grace Community Church.

Collecting money Friday and Saturday were Chris Gibson and Jill Grant while other club members kept a close watch on all the tables.

A selection of hardback books was also available that could tempt any die-hard bookworm.

There is an old saying that 'somebody's junk is someone else's treasure' and this was certainly true as people gathered an armful of clothes and loaded themselves with several items of interest.

"The dinnerware table was the most popular," member Marlene Swan said. "There was a lot to choose from."