Cameron Huerta scores for the Generals.

The Shafter High Generals shut down the Kern Valley Broncos, 48-0, continuing their undefeated streak since their recent win against Arvin.

Dozier's success would not have been complete without a variety of receivers including transfer Cameron Huerta accounting for two of the touchdowns on five catches for a total of 127 yards. 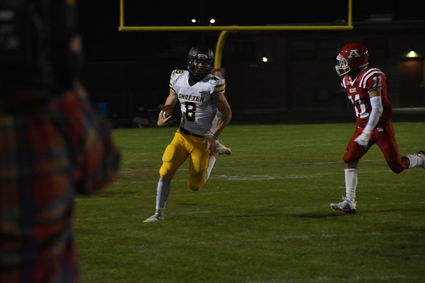 The game was even better for the Generals' defense, who shut the Broncos out and didn't allow them into the red zone, dominating the line of scrimmage and stopping Kaden Preston, the Broncos' quarterback.

The Generals offense had 39 plays from scrimmage, and scored on seven of them. In addition to Huerta, Dozier had touchdown passes to Jonathan Sanchez, a 29 yard touchdown pass to Domnik Torres, and two scoring passes to Devon Sundgren. Sundgren ended the game with six catches for a total of 155 yards. Torres also had an interception for the Generals' defense.

The Generals will take their record into a matchup on Friday night to Foothill High School, who beat Arvin last week 33-6.