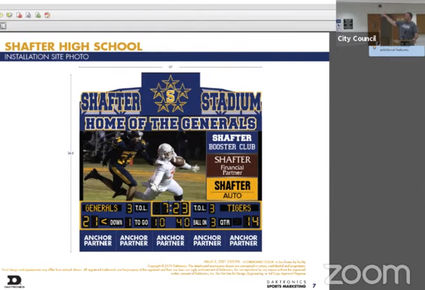 Coach Jerald Pierucci gave the council a presentation on a new video scoreboard that will be going in to the new stadium at Shafter High School.

The City Council approved forming an adhoc committee that would explore ways to keep the library open.

The library is currently open two days a week until June.

The City of Shafter came to an agreement last month to cover the costs for the operation of the library for a short-term period.

The committee will be led by Mayor Pro-Tem Chad Givens and council member Gilbert Alvarado and will include other community members.

Shafter High Coach Jerald Pierucci also gave a presentation to the council that highlighted the planned video scoreboard that will be a part of the new stadium renovation.

The scoreboard will be 24.5 feet by 10 feet and will include a video board that can show instant replay, slow motion, as well as different graphics that would be prepared at the Media Lab at the high school.

This board would be used for football, soccer, track, the Fourth of July fireworks show and Shafter High and Richland Junior High graduation ceremonies. The board would be able to show graduates walking across the stage on the big screen.

The company that will be building the board is Daktronics, who has created boards for a variety of college and professional sports stadiums throughout the country.

"We would be the only school in the Central Valley that would have one of these boards and its capabilities, which would be great for our kids and our entire community," said Pierucci.

The board would also help local businesses who could buy space on the board for advertising, giving the companies a wide audience on a weekly basis.

The cost of the video scoreboard is around $196,000. It will also have a state-of-the-art sound system that would cover the entire stadium, the field as well as the stands area. When asked about the sound concerns that residents may have, Pierucci said that he and Principal Russell Shipley decided to flip the sides of the field that the scoreboard had previously been on. The new scoreboard would be facing away from the street, which will lessen the sound that would reach the residential areas, as well as the video graphics on the screen.

The operations of the scoreboard and graphics would be done by Shafter High students who would become certified to operate the software and programs provided by Daktronics.