Generals ready to hit the field as sports resume 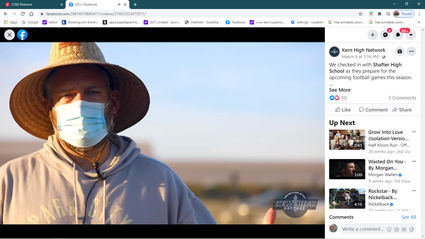 The Shafter High School sports programs got the green light and are preparing for an abbreviated season, with the only exceptions being indoor sports such as basketball, volleyball and wrestling.

The Kern High School District laid out a plan that will get the majority of the sports programs back in action beginning late this month.

Practices have begun with safety measures and protocol in place including temperature checks, daily screening and social distancing when possible.

The Shafter Generals football team will take the field for the first time in over a year when they face SSL foe Arvin on March 26.

The football season will consist of five games against Arvin, Kern Valley, Foothill, Mira Monte and Golden Valley. They will have their Senior Night against Kern Valley on April 1 at Centennial High School.

In addition to the pandemic, the Generals must also find a location for their games, with Shafter's stadium in the middle of a major renovation which will not be complete until the fall.

The Generals will not face Wasco High.

"Our guys have been working so hard, through all of the talks, waiting to see if they would be able to play. There were so many times when their hopes would rise then it would be down again. It was such an up and down time for the team. I am just happy that their hard work is not in vain and they will be able to have a season," said Coach Jerald Pierucci.

It is currently uncertain if spectators will be allowed at the games.

Shafter High Principal Russell Shipley said that the district decided to let the players have a season, while still keeping them as safe as possible.

"I am excited for our players and the coaches who have worked so hard through all of this, giving them something for all of their efforts," Shipley said.

The baseball, softball, and soccer teams will also be facing Arvin, Foothill, Kern Valley, Golden Valley and Mira Monte in their seasons.