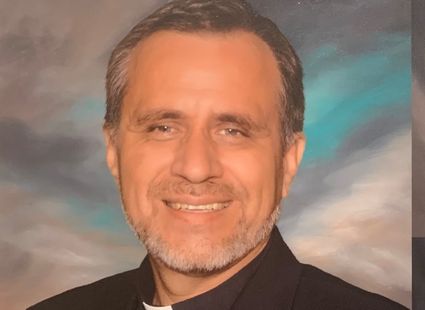 Father Raul A. Sanchez-Flores has been relocated to St. Joseph's Church in Selma.

When asking Sanchez-Flores whether or not he had a choice in accepting a new assignment, he said when a parish priest is asked to change locations, the priest usually agrees to the move.

"On Tuesday Feb. 19, I received a phone call from Father Sal Gonzalez, Vicar General, who was calling on behalf of our bishop, Most Reverend Joseph V. Brennan, D.D," Sanchez-Flores said. "After a brief greeting, Father Sal told me: Bishop Joe wants you to take care of St. Joseph, Selma. I was in shock for a few seconds and I asked: 'Can I think about it?' However, I remembered that we owe obedience to our bishop and after a minute I said: 'How can I say no to our bishop. I feel honored he trusts me at St Joseph's in Selma.'"

Sanchez-Flores said that he was unable to tell anyone about his reassignment until he received a letter from Bishop Joseph V. Brennan to make it official.

"I want everybody to know that it was very sad for me to leave. My six and one-half years at St. John the Evangelist, Wasco was a great learning experience," he said. "On July 2014 Wasco began as an assignment but with time it became a family and my home."

Sanchez-Flores added that he often received compliments from both English and Spanish-speaking parishioners that he had done a lot; however, the way he sees it, everyone did it together.

"I had the vision to work for the spiritual and material benefit of the parish and people believed in it," he added. "My favorite places to go that last few years were to Home Depot and True Value. There were always projects to be done."

He feels at times that he didn't do enough because there were some big projects he couldn't do.

"A year ago I was planning to install an air conditioner system for the parish hall," he said. "It was a $120,000 project. A mechanical engineer was already working with the blueprint of the hall to make a decision on how to install the system. I am glad we did not start the project during the pandemic."

"I don't doubt that he will do a great job as the new spiritual guide," he said.

Sanchez-Flores is familiar with the Selma area as his first assignment was as priest at St. Anthony of Padua, Reedley.

"During that time, I used to help Vigil Masses with Father Efrain Martinez, who was the pastor those days," he said.

He also said that he hopes to bring to St. Joseph's what he has learned from ministering the community of St. John's.

"My philosophy is that we can always improve ourselves. I was always proud and grateful of all volunteers sharing their time and talent with the community," he said. "I know the St. Joseph community is hungry to work and fulfill a relationship with God through a sacramental life and work."

Sanchez-Flores also added that he will pray to his new patron St. Joseph, but also to his beloved St. John the Evangelist for their intercession.

"I am very grateful with residents of Wasco but also good friends from Shafter and Delano," he said.

In addition, Sanchez-Flores asked that everyone pray for Preciado and himself so both, with the help of the community, do their part working for the communities trusted to their care.

"Finally, I am very grateful with our emeritus Bishop Ochoa for trusting me with St John's, Wasco six and a one-half years and with our current Bishop Joe for this new mission at St Joseph Selma," he said.

St. John parishioner and Mayor Pro Tem Gilberto Reyna said that Sanchez-Flores has been a great spiritual leader for the St. John parish.

"Shortly after arriving in our community, Father Raul attracted many more Catholic faithful to our church by celebrating a much-needed additional weekend Mass," Reyna said. "He provided opportunities for all parish groups to participate in the church and offered them spiritual guidance to help them grow in their faith. He made many improvements to the church building, moved a beautifully carved alter from the chapel to the nave and added a new tabernacle and wood paneling all around it."

Reyna also said that Sanchez-Flores installed window treatments and added the church's name to the steeple as well as new lighting to the building's exterior.

"He made our church more beautiful," he added. "Through the generous donation of a parishioner, he installed new church bells. He also remodeled the Parish Hall and the old Convent building and moved the church offices to the latter."

Reyna also said that Sanchez-Flores had all the creative ideas that made the church more parishioner-friendly and more beautiful and he was personally involved with all of the above undertakings, often making trips to get materials needed to complete the projects.

"Learning of Father Raul's departure from our parish saddens me," Reyna said. "I realize I'm not only saying goodbye to my spiritual pastor but my good friend. I wish him the best. I pray to God to guide Father Raul's steps in his new journey."