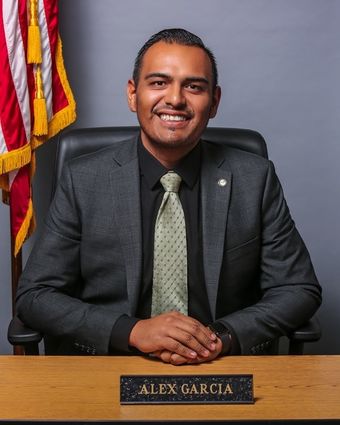 Mayor Alex Garcia has been appointed to serve a second term.

When Garcia was interviewed about two years ago, he stated that he felt the position of mayor should be more than just a one-year term. He often commented that "It would be nice if the mayor could serve two years instead of one because it takes almost a year to get your feet wet in the leadership position."

Garcia said that he feels like he has had a two-year term being selected mayor once again so close to his last term.

"Alex cares deeply about the City of Wasco," council member Vince Martinez said. "I felt it was important to have a well-spoken, experienced leader to help guide our city through these difficult times. Alex and I do not agree on every issue, but I have always found him to be willing to listen and make decisions he feels are best for the City of Wasco."

Martinez also said that he feels Garcia's willingness to listen and consider the input of those who don't agree with him to be a quality of a strong leader.

Council member John Pallares also said that he voted for Garcia because he has experience.

Garcia is a hometown young man who graduated from Wasco High School in 2007. He was involved in Future Farmers of America in school and served as an officer at both the local chapter and sectional levels. He ran for a state FFA officer position, but lost that.

"That's when I got my first taste of politics," Garcia said.

After graduation, Garcia attended Fresno State, where he spent time during the summers as a volunteer, registering voters in rural communities within Fresno County.

Upon graduation, he relocated to Las Vegas and worked on the Obama 2012 re-election campaign.

His political experiences had him walking the streets, putting up signs, addressing public forums, making political speeches and holding impromptu gatherings in support of political ideas or candidates. Garcia is knowledgeable about the history in Wasco and is up to date on ordinances and resolutions the city has passed.

Garcia is also Wasco's youngest mayor. Former mayor Tilo Cortez said in an earlier interview that Garcia is passionate about Wasco and what he can do to keep making Wasco the best place to live.

"It's an honor to serve, and it speaks volumes of the confidence my colleagues have in my leadership on this council and in the community," Garcia said.

He envisions his focus to the city committing to sustainably delivering services for residents such as providing clean drinking water, waste removal and road repairs in the midst of a pandemic.

"With that being said," he added, "City Hall must weigh the decrease in revenues versus ever-increasing costs for maintenance, services and safety. Despite the challenges ahead, I'm confident our city can meet the moment of the current health crisis."

Garcia is currently co-hosting weekly collaborative safety meetings due to a number of factors such as state prison realignment, covid-19, law enforcement policy to limit contact, overcrowding in our county jails, and the dissolving of the sheriff's gang unit.

"Depending on how you see it, having a city with little big-box retailers impacted by the volatility of 2020 we have seen less than projected shortfalls in the city budget," Garcia said. "Innovatively operating local government is our top priority."

Garcia feels that in order to rally residents around public safety and other neighborhood programs, the city must begin with an opportunity for them to voice concerns and ideas.

"It's paramount that residents feel heard in order to expect families to take ownership of this issue and the 'Moms' group," Garcia said. "Once we get organized, we can streamline the feedback local leaders receive regarding the kind of community we envision for the future of Southgate. That includes advocating for pedestrian lighting, recreation opportunities, training deputies on bike/foot patrols, and even reprograming county dollars for gang prevention."

Garcia also added that he can't do this alone. This began with the Mayor and Moms meetings that all residents are welcome to participate. He suggested that residents consider this something like his previous Mondays with the Mayor 2.0.4.

"Now after swearing my second oath-of-office, I feel like I've been around the block a few times. I am certain now with my unopposed re-election and re-appointment as city mayor I have been given an unmistakable mandate to lead. In my first four-years, residents witnessed what I can deliver when I hit the ground running," he said. "Armed with a renewed sense of urgency and passion for service, I'm ready to put the 'pedal to the metal' this year as mayor."

Garcia also plans to focus on industrial growth in the area and he continues to stay involved with discussions regarding the High Speed Rail.

"Since it is happening and going to come through Wasco, I want to make the best of it and reap the biggest reward for our residents as possible," he said.