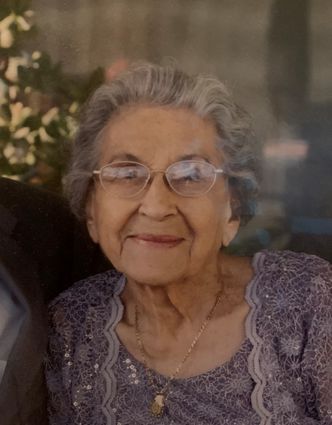 Julia's father worked for the Santa Fe Railroad in the heart of the San Joaquin Valley. As fate would have it, this railroad led Julia and her family to Shafter, where they settled and made a home.

After her mother's unexpected passing, she helped raise her brothers and sisters, even though she was still a young girl herself. She was a nurturer and caregiver from the start.

One afternoon, as Julia and her sisters were walking in downtown Shafter, she spotted a handsome young man sweeping the sidewalk in front of his workplace. This young man was Daniel Escalante, and he had just returned from serving in the U.S. Army. It was love at first sight.

While they were courting, Julia worked at an ice cream parlor downtown. Danny would come in for a milkshake or sundae, but mostly he just wanted to see Julia. She remembered these times fondly and shared with her kids how she would always give Grandpa extra ice cream and extra toppings when he visited the shop. Her plan worked.

In 1948, she married Daniel and thus began their love story, which lasted more than 71 years. They were a match made in heaven and seemed to complement each other every step of the way.

Early in their marriage, Julia worked with Danny and his cousin Steve for a local farmer in Shafter. Out of necessity, she learned how to drive and operate a Caterpillar tractor. Everything was fine until the fateful day Julia hit a standpipe. Other than her ego, she was left unscathed. Not sure the same can be said about the standpipe. It was a moment she was playfully teased about for years.

Danny and Julia had an unmatched sense of humor, which filled their home with joking and laughter, sentiments carried on by their children and grandchildren.

Danny and Julia were the most loving and devoted parents. Together they raised seven children who they loved and adored. Julia was a natural, and homemaking came easy for her. She had been caring for people her entire life, and her penchant for raising her children and taking care of her family never wavered.

Julia was a wonderful cook and baker. In all honesty, she wasn't just a cook; she was a culinary master. Her hot-cooked meals not only drew her family around the table but also friends and neighbors from near and far. If you stopped by to visit Danny and Julia, you were sure to leave with a full heart and a full stomach.

Julia enjoyed sharing her culinary expertise with her family, while Danny taught them how to master the grill. This expertise was not lost on her children, who have all continued in the tradition of their parents. Julia even made sure her daughters-in-law learned how to make her homemade tortillas. We're pretty sure she shared her secrets with them to make sure her boys continued to eat well.

Christmas and holidays were filled with fresh-baked cakes, cookies, enchiladas, tamales, soups, pies, and the list goes on. Her family has many happy memories of being gathered around the kitchen table, enjoying delicious homemade meals, sharing laughter and sometimes even tears. Whatever the occasion, there was always love.

Julia also spent a lot of her time helping in the kitchen at St. Theresa's Church and was a member of the Women's Altar Society. Julia was often asked to bake and cook for church events and other local charitable causes, including the Shafter Historical Society, which her husband Danny was a member. She did so happily.

Julia also made sure to make treats for her grandchildren, providing for their school events and fundraisers. Her passion for the kitchen led her to her job with the Richland School District, where she worked for many years in the school cafeteria. Julia always made sure every child had plenty to eat, and she's still remembered by many of those former students to this day.

Julia had an adventurous spirit, and that spirit shone through on the family's many camping trips and cross-country road trips. Danny took the family camping several times a year, and Julia was always ready, whether at King's Canyon, Morro Bay, Montana de Oro or some other beautiful place. Julia loved the beach and would often take the kids to the water to play, swim and collect shells. On one particular trip to Morro Bay, Julia took her granddaughters on a bike ride. She took her feet off the pedals and coasted full speed down a very steep hill, causing a brief panic in the girls, followed by uncontrollable laughter at the bottom of the hill. There was never a dull moment.

The family would like to thank the wonderful staff at Carrington of Shafter for providing loving and caring assistance to Julia and Danny during their stay with the Carrington family and their special care and going above and beyond to make the family as comfortable as possible.

Julia's viewing will be held at Peters Funeral Home in Shafter on Tuesday, March 2, from 4-8 p.m. Graveside committal will be conducted at Shafter Memorial Park on Wednesday, March 3, at 10 a.m., with Msgr. Perry Kavookjian officiating.