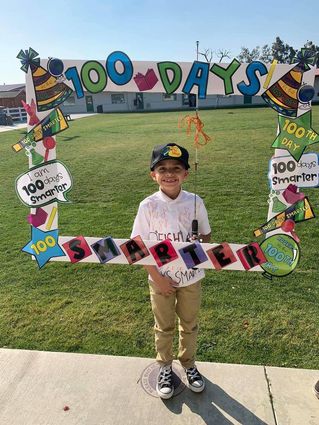 Grimmway Academy of Shafter has been conducting classes for over 100 days now, with a mix of in-person instruction in cohorts, and distance learning.

According to Grimmway Academies’ CEO Casey Yeazel, it is important for the students to be able to be together at school, with safety precautions in place, a plan that was approved by the board and implemented by their staff.

According to Yeazel, about 20% of the parents at the academy have elected to have their children taught using distance learning on a full-time basis. The school has adhered to the recommendations of the CDC and the Kern County Public Health Department, with several hand-washing stations on site, health checks, and face coverings worn at all times while at the school.

Yeazel said that they invested in the fall, with federal money, in a couple of temperature sensors. Students enter the school and are scanned. If a student registers above 100.3 degrees, protocol is followed, according to county and state guidelines. Yeazel said that before they leave for school, parents do a home health check, which the staff considers a child’s admission ticket for campus. In it, they make sure that the child has no symptoms of the virus and is in good health.

Once in class, desks are separated by plexiglass and are spaced out according to guidelines.

Another highlight of the school for students, parents and staff is the Edible Garden at the academy. Yeazel said that the garden is still producing vegetables and are used extensively in the students’ meals on a daily basis.

“We practice social distancing and safety measures and continue to utilize the edible garden. It is a valuable asset as a source of nutrition and also a very valuable teaching tool,” Yeazel said.

He also said that the garden is helping the community.

“With the amount of food that we are growing, and with a certain percentage electing to use distance learning, we often have a surplus of products,” Yeazel said. “We send a message and we give the food away on a first come, first served basis.”

With numerous district having to distance learn full time, Yeazel said that a big reason for their success in operating the school during this time is the bond and cooperation that exists between the students, staff, and teachers.

“It would not be as successful as it has been without the amazing relationship that exists between our scholars, their parents, and our teachers,” he said.

Grimmway opened when Kern County was placed in the red tier. They also had signed waivers for in-person learning for all of their students. Yeazel said that since they were already open when Kern went purple again, they are allowed to stay open.

“We are doing quite well with our students and staff’ health. We have had no cases that have originated at the school,” said Yeazel.

He also announced that they are now in their Open Enrollment period for the 2021-22 school year. Those interested can visit them on their website or contact their office.