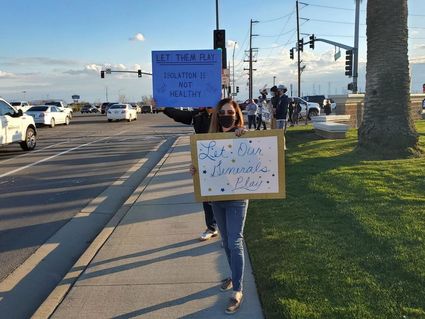 It has been almost a year since there has been any sort of high school sports competition.

According to Shafter High Principal Russell Shipley, the sports dilemma is a frustrating one.

According to the California Interscholastic Federation, since Kern County is in the purple tier, cross country is the only sport that can begin competition.

If Kern County gets into the red or orange tier, there would be more sports added to the list.

After Gov. Gavin Newsom lessened the restrictions on schools, and the go-ahead was given by the CIF, it was anticipated that the Kern County High School District would okay the beginning of the cross country season.

As of Wednesday, the Kern High School District has chosen not to begin its cross country season yet.

Even with the green light, Stan Greene, at a recent Kern High School District Board meeting held the first week in February, said that the district did not feel comfortable beginning the season for cross country, even with other school districts electing to open their seasons.

For Kern County to have a football season, the county would have to be in the orange tier. Orange tier is a level that is six times fewer new cases per 100,000 than what Kern County is at now.

At the Kern High School District board meeting, Stan Green said, "I don't want to come here and be a dream crusher, but it is pretty apparent that we will not be reaching the orange tier before this school year ends."

Shipley said that Shafter High is a part of the Kern High School District and "we have to follow their guidelines, no matter what our personal feelings are."

Lori Sundgren, a Shafter High parent who is frustrated by the situation, recently helped hold a Let Them Play Rally, which was attended by about 100 parents and students in Bakersfield.

Among her concerns are the stalemate that the district seems to be in, and also the damage that the suspension of play is doing on the kids of the county. Sundgren said that "we live in the social media age, and our kids can see kids from all over the country who are still able to participate in sports."

Seeing kids from other states get to continue their sports careers, Lori said this is doing further damage to the psyche of kids in California.

"These kids are losing their childhood, she said.