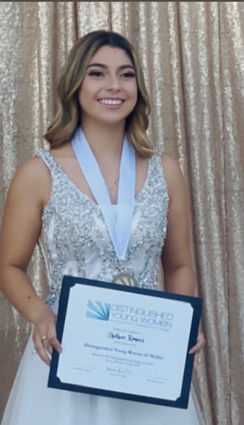 Shelbee Ramos, Shafter's Distinguished Young Woman for 2020, competed in the state competition over the weekend and received a special award.

The event was done virtually this year because of the covid-19 limitations, just as the local competition was held, with the performances sent online and the interviews being done via Zoom.

Ramos said that the competition was a great learning experience and she had such a good time competing in all of the phases, even though it wasn't the same experience the girls in the past have had.

"We didn't get to stay with host families and meet with the other contestants in person, such as in previous years, but I realize how blessed I am to have this opportunity at all and it really was a great experience overall," said Ramos.

Ramos said that each contestant was able to perform their talent portion of the program and record it on their own. They would then pick out the best tape and send it in to the judges. This was the same for the physical fitness routine.

Shelbee received a special award at the end of the event. She won the Best Self award, which she split the award with another contestant, each winning a $500 scholarship. Ramos sang for her talent, performing a song by Adele.

Ramos was sponsored by Richland Chevrolet. She said that sponsors have been so great throughout the competition.

"The Millwees are a great group of people," commented Ramos.

A phase of the competition was physical fitness.

Ramos is the daughter of Bree Colvard and Richie Ramos.

"But, once the state competition arrived, I was blessed with so much love and support from the community," said Ramos. "I was so surprised that that many people even knew that we had had a competition."

Ramos said that even though the experience was so much different than competitions in the past, she still had a great time and "I consider myself very lucky to be able to go through this experience."