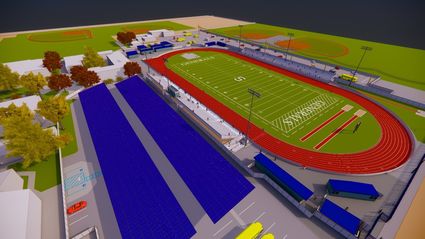 This rendering shows what the new stadium will look like.

Although the pandemic has dampened their season, the Shafter Generals will have a newly renovated stadium to look forward to once they can play again.

Renovations have begun on a brand new stadium for Shafter High School, with the demolition of the homestands and portions of the track last Monday.

The project, which will cost between $7-8 million, is expected to take approximately 305 days to complete.

According to Principal Russell Shipley, they are hoping to be finished by October or November, giving the Generals a chance to play in it about halfway through the 2021-22 season.

The remodel will include new lights, sound system, press box, and a nine-lane all-weather track.

There will be bathrooms on the south side of the stadium, along with a ticket booth that will accommodate both the home and visitor entry.

New bleachers will be a highlight for the project as well.

Another feature will be a new video scoreboard on the south end that will be able to run instant replay and graphics. At the southwest part of the stadium, there will be an additional concession stand. All of the buildings and facilities on the north end of the stadium will remain in their place.

New exterior and interior fencing is included in the project. Field renovations will be done, as well as curbing and landscaping to beautify the area.

There will be a state-of-the-art press box to go with the new sound system.

Shipley said that if the Generals are allowed to have an abbreviated season this year, all of their games will be played on the road, even if technically assigned as home team.

This will be the way the 2021-22 season will be played until the project is complete and they are allowed to host their first games in their new home.

With the new all-weather, nine-lane track, it will also make the site a possibility to host large meets, such as league and valley championships.

"This has been a long time dream of ours that is finally coming true," said Shipley. "We are very excited about this project and we are happy for our school and this deserving community." 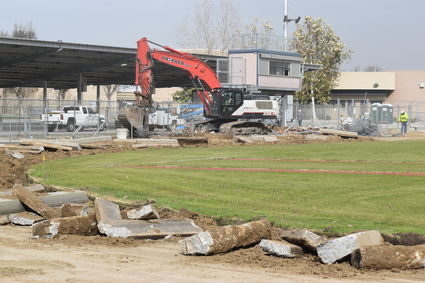 The press box was the only structure remaining as crews began the demolition of the old football stadium.