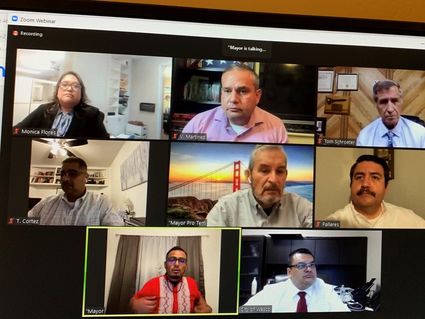 The City Council is considering a feasibility study to determine if the city can sustain its own police department.

At its Feb. 2 meeting, the council discussed the city's investigation of an alternative to using the Kern County Sheriff's Office in the future. The city's contract with the sheriff's office expires this year.

The annual cost for the fiscal year 2020-21 was $3.98 million, which is a 5% increase over the previous year. The last contract with the sheriff's office was a five-year contract from 2016-2021. In 2018, the city conducted a study to inform the council on what they could expect if the city creates its own police department. The initial increase was projected to be 8.62% or a total cost of $4.12 million.

A few items that will change under a contract renewal include:

• Wasco will not receive a replacement deputy when a deputy is out for an extended period of time,

• Wasco will be billed at the actual cost of each deputy and step they are currently in,

• Wasco will be billed for extra services such as SWAT, bombs and homicide, etc., and

• Overtime cost calculation to increase from 9% to 15%.

There would also be increased costs in base salary, overtime, equipment as well as the cost for Body Worn cameras and special investigations such as homicides, detectives, etc.

Several attendees called into the meeting to ask if the City Council will have a way that the residents could have their say on whether the city forms its own police department or stays with the sheriff's office.

After a detailed discussion on the city forming its own police department, the council requested the city put together a feasibility study before making any decisions.

"This could take a few years to put this together," City Manager Daniel Ortiz-Hernandez said.

The feasibility study will provide an in-depth look if the city has the resources to start a police department and establish if the city can maintain and retain an adequately trained force. The estimated cost of the study will be between $40,000 and $60,000 and could take 5-6 months to prepare.

Three residents told the council they called the Wasco Substation over the past weekend to complain about loud music and partying.

Each resident said that he/she made several calls into the sheriff's office to complain about the noise and asked why the response time took so long.

At one point, one resident stated that a deputy came out, got out of his vehicle and walked up to a noisy residence and then turned around and got back in his vehicle without citing anyone.

One of the callers stated that she lived over 1,000 feet from the noisy residence and asked why the noise ordinance was not enforced.

Sgt. Peter Martinez was not in attendance, and Mayor Alex Garcia said that he would get the names and addresses of each resident who had complained and would pass this information on to Martinez.

In other business, residents will be able to get financial help from the Community Development Block Grant program.

The City Council unanimously approved the city manager to sign an application for a grant funding agreement through the Community Development Block Grant Program with Self Help Enterprises to assist residents with financial issues that they experienced during the pandemic. This grant will allow households - not nonprofits - to apply for help with rent and other necessities needed due to the pandemic.

The city manager also reported an update with the High Speed Rail Authority on the Grade Separation and Operation Agreement.

"The city's position has been that it will not approve one agreement without considering all others," Ortiz-Hernandez said. "This means that agreements would be considered and versions approved by the City Council at the same time rather than separately months apart. In this manner the city ensures that our concerns and issues we have raised are addressed and we can understand how one agreement may impact another and prevent, if possible, any adverse impact."

Ortiz-Hernandez also said that the last tenant moved out of the labor camp and the process has begun to transfer ownership of the property from the Wasco Housing Authority to the City of Wasco.