Property crimes on the rise in Shafter 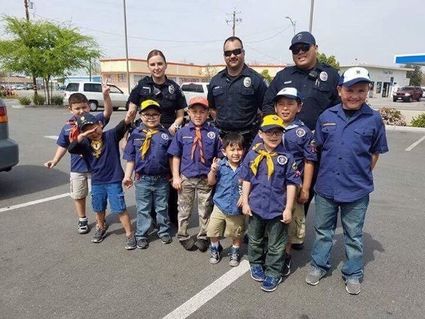 The Shafter Police Department with members of the scouts. Zimmermann said that he is hoping this pandemic will be taken care of and they can resume their engagement with the community.

There has been a rise in property crimes, including theft, in the last year, Shafter Police Chief Kevin Zimmermann said.

He said one factor that has played a "more significant role" than the pandemic in drug and property crimes has been the release of thousands of state inmates ordered by Gov. Gavin Newsom in July.

"We have found a different type of criminal now," Zimmermann said. "Instead of a low-level criminal who we do not consider as very dangerous necessarily, we are seeing a more sophisticated criminal, with a lot of them carrying guns."

Zimmermann also noted the slacking of laws that punish criminals not deemed to be dangerous.

"Now, we can stop someone for having meth, or heroin, but we have to just cite them," he said. "We keep arresting these criminals over again until the judge gets tired of seeing them and might send them away for a while."

Zimmermann said he hopes sometime soon to be able to host community events such as Coffee with a Cop.

"Of course [the pandemic] has had an effect [on the department], but we believe that we have stayed aggressive in our efforts to protect the city, and it has resulted in more arrests and the safety of our city," he said.