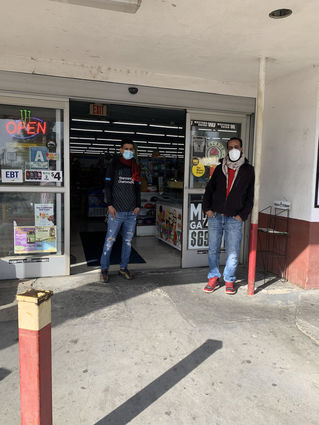 Fiesta Latina has risen to the challenge of operating during the pandemic, delivering to residents for free.

"We deliver to our customers free of charge as a service to our community," said owner Saeed Saleh. "Butcher Antonio Vadillo has been with us for 16 years."

Saleh arrived in the United States from Yemen in 1991 several years after his brother, Gna Saleh, arrived in 1987. His brother started Fiesta Latina Market and managed the store until Saeed arrived. Now, Saeed manages the store every day.

Considered an essential business during the first closure, the store has stayed open during the pandemic.

Saeed Saleh has several businesses in Shafter and Wasco such as Fashion Shoes on Central Highway in Shafter and Fashion Forward in Wasco, also on 7th Street.

His wife is Agsan Shibi whom he married in 2005 and the couple has five children.

He had no problem when he received a call from a Wasco resident who had covid-19 and needed groceries. He went into action putting together the requested items for free delivery.