Cameras will be reading license plates 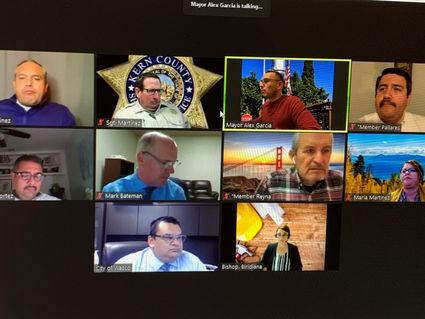 Wasco City Council and staff members at meeting via Zoom.

The council unanimously approved the lease of 10 Flock Safety Program cameras to be placed strategically around the city at an installation cost of $2,500 per camera. The 12-month cost of this program will be $25,000.

Jesse Mund, from the Flock Safety Program, advised the council that the cameras are hypersensitive to the numbers on license plates on the back of vehicles and are not focused on the driver or the front of the vehicle as well as not focused on pedestrians, even though a pedestrian may be viewed in the camera.

Following the Flock Safety Program report, Ortiz-Hernandez then introduced the Community Partnership Camera Rebate Program, which the council discussed how residents could be reimbursed for the purchase of a home surveillance camera system not to exceed $100 or 50% rebate of the cost of the first camera and not to exceed $50 rebate for the cost of a second home camera.

In conjunction with the discussion on crime in the city, Martinez prepared a presentation comparing 2019 and 2020 crime statistics for grand theft auto, which showed that through December 2019 the city had 11 incidents and through December 2020, there were 31 incidents.

The council also unanimously approved the appointments of Traci Mills-Clendenen and Petra Rueda to the planning commission, and Danny Brown was appointed to the Mosquito Abatement Board with four yes votes and one no vote.

Director of Public Works Biridiana Bishop also reported after attending a county public works meeting, an increase in land use fees for illegal dumping was proposed, which means an increase in taxes. Single-family home fees will increase from $82.89 to $105 and an increase for apartments from $66.30 to $84.00.

Wasco Parks and Recreation Manager Vicki Hight and Planning Commissioner Pedro Ramirez were also both recognized for their contributions to the city and presented each with a Proclamation of Recognition.