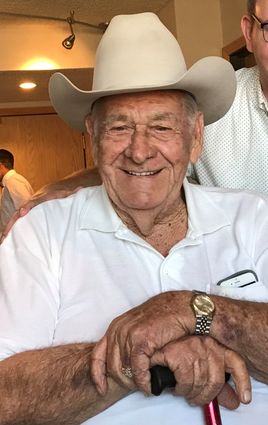 Oscar JR Richards was born Feb. 3, 1936, in Edom Texas, to Maggie Florence (Carpenter/Perdue) and Oscar Shores Richards. Losing a tough battle with covid after being hospitalized for a month, JR passed away peacefully into the arms of Jesus, surrounded by his loving family, who spent a precious few last hours with him at home on Jan. 5, 2021.

His early years were spent in and around East Texas. His parents were sharecroppers and from an early age, he was instilled with an incredible work ethic that would carry him far from those rough and humble beginnings. When JR's mother passed away he was only 9 years old, it became necessary for him to abandon school in the fourth grade to help his family by working. Propelled by a drive to better himself and his family, he eventually moved to Buttonwillow as a 17 year old in 1953.

During his nearly seven decades in Kern County, JR was a successful businessman beloved by the farmers and agribusiness firms he served in his custom harvesting and trucking enterprises, which he built from the ground up. A gentle giant of a man, he was a natural leader who also served his community in the Lions Club and in countless other unheralded acts of kindness, compassion, and generosity. A man of great humor and decency, he brightened the lives of all who were fortunate to be his friend.

JR's last years were tough for him as he battled with mobility and breathing issues, but his cheerful temperament never flagged. Up until the end, he got up every day at 4 a.m., as was his lifelong habit, having coffee with friends, caring for his family, taking care of business, doting on his grandchildren and great-grandchildren and, whenever possible, singing a mean karaoke with his wife Susie.

We would like to thank you all for your prayers and support, the meals and flowers provided, but most of all, for the way you held us up and sustained us throughout this hard time. Dr. Carlos Alvarez was a tireless advocate throughout the entire time, tending to the whole family like an angel and we are forever grateful to him. We would also like to thank emergency nurse Melissa Muxlow who went out of her way with time and care to help the family communicate with JR via her phone, as well as her gentle, loving bedside manner with him, calling him "Papa JR."