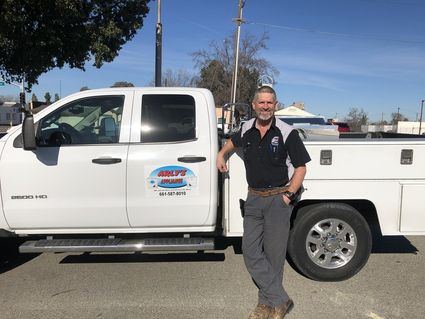 Rod Feil is the second generation running Arly's Appliance, going strong after over 60 years in business.

It has been over 60 years that Arly's Appliance first opened its doors, and today they are still the go-to repair men when it comes to appliances and small motors.

Two days turned into three and Fiel decided to strike out on his own. Fiel acquired the Maytag franchise eight years later and holds it to this day.

With the pandemic in full swing, Fiel said that he has seen his business growing, especially in repairs of major appliances.

"I think that a lot of people are getting their existing appliances fixed, instead of buying new ones," he said. "The inventory of new appliances is shrinking, making it more feasible to have their appliances fixed."

Fiel also said that it seems that more people are staying home, cooking more, doing their own laundry, and opting to hang on to their machines, instead of navigating the task of finding a new one.

"The only thing that has been a problem in our business is the availability of parts," he said. "What used to be an overnight delivery can now take up to a week or more, because of the companies shutting down because of the virus, or having parts backordered, as the companies work to fill the orders."

Fiel brought his son, Rod, on board a couple of years after he finished college. Rod had worked for his dad during his last two years of high school but took a couple years off to go to school at Fresno Pacific. Rod came home after the two years and return to the shop, working side by side with his dad.

With Arly's eyesight starting to fail, Rod's and Arly's roles reversed, with Rod making the service calls and Arly working on appliances in the shop. Although it was a trying time for the men, Rod said that it is almost a blessing in disguise as it has enabled him to have such a special relationship with his dad.

"It has been a gift from God to be able to work with my son, Rod, for all these years," said Arly. Arly did say that he takes several precautions now when making house calls, wearing face coverings and he takes care of his self diligently.

The community of Shafter is responsible for a lot of their success through the years, according to Arly.

"I am so thankful for the support we have received from the community through the years and we consider ourselves lucky to be a part of this wonderful community," said Arly.

Arly said that business is still going good, if maybe a little different in its makeup.

"In the earlier days, you could fix something on a washer without having to take the thing apart. Now, you end up having to replace an entire board or system, with today's technology," said Arly. One thing that has not changed over the years is the excellent reputation enjoyed by the father and son team.

"You know, a lot has changed, but some things stay the same. Take our reputation, we have a good reputation because of word of mouth. Sometimes you can't replace all of the online ads or Facebook things, except by good word of mouth. We are servicing residents and families who have parents and grandparents who were customers of ours," Arly said.

Arly invites the community to give him a call if they are in need of a repair, be it big or small, keeping their machines running in the face of this current storm.