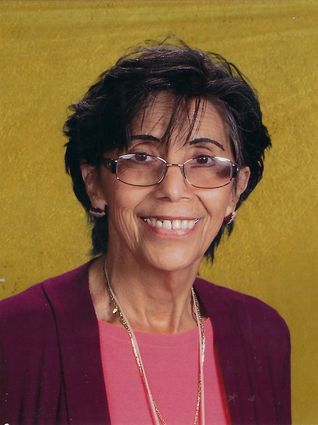 She is survived by her husband of 42 years, Joe Graf of Wasco, and four children, Alex Graf of Paso Robles, Erick Graf (Mirley) of Oxnard, Nolan Graf of Agusta, Georgia, and Kelly Guzman (Martin) of Los Angeles, and five grandchildren Tomas, Nicolas, Audrey, Elizabeth and William.

Camapua is a small town in Central-West Brasil, in ranching country. Maria grew up in an era when electric service, health services, as well as education opportunities were minimal. Getting a better education became one of her ambitions. She was finally able to graduate from high school at age 22, and when searching for an escort for the graduation ceremony, she asked a newly arrived Peace Corps volunteer from the United States to be her chaperon. They continued to communicate, and after graduating from a Catholic college, Dom Bosco, in the city of Campo Grande, MS, and after exchanging letters for four years, Maria finally came to the United States on a fiancé visa, and married her husband Joe Graf, in October, 1978. The couple lived in Bakersfield for three years and have lived in Wasco for the past 40 years.

Maria – or Ildonete- could not speak any English when she arrived in California, and attended the English as a second language school for adults at Bakersfield High School, where she proceeded to learn not only English, but also Spanish, while conversing with her mostly Spanish-speaking classmates.

Maria had an empathy and love for young children and had a talent for teaching them. She practiced first on her own children, the earliest learning the A-B-C's by 18 months, the latest by 3 years old. She then became employed by the Maple School District as a bilingual aide in the kindergarten classroom for approximately 27 years. She often used her practical teaching style-including single pieces of candy as rewards- to motivate her students. Her greatest joy was to see her students learn English and then excel thru the later classes.

As a cafeteria monitor, she would regularly use her soothing, but firm tone of voice to quiet a hall full of rowdy children. An ardent Catholic, and member of St. John Catholic Church, Maria continued educating children through these years by teaching religious education classes to first and second grade children to prepare them for their first Communion. She was also a Eucharistic Minister, delivering Communion to the sick and a member of the St. John's Women's Society.

Since approximately 1995, Maria became afflicted by a rare (one in 20 million people) slow growing form of cancer that started in her pancreas. She flew by herself on various occasions to the M.D. Anderson Cancer Center in Houston for consultations. She had many sessions of chemotherapy and hydrations at CBCC in Bakersfield, and a number of operations, procedures, and hospitalizations in Bakersfield and at Stanford Medical Center. The latest treatment was a new radioactive isotope therapy at Stanford. Through the cycles of treatment, Maria always remained positive and cheerful, many times being supported and helped by her good friends including Joanne E., Earlynne W., Maria S., Kay E., Dorothy G., the late Ingrid R. and Patti P., Shirley P., Maggie G., Adela F., Patti M. and many others to whom she was forever grateful.

She participated in, and sometimes co-chaired, the St. John's Angels team in the American Cancer Society Relay For Life event held at the Wasco High School athletic field. It was always a positive experience for her to walk the track with the other survivors of cancer.

Beside the successes of her four children, another of Maria's proud moments was becoming an American citizen on Nov. 10, 2015.

Maria was very active on Facebook and was able to stay connected to her family, classmates and friends in Camapua. She loved her family and friends in the U.S. and Brasil, and communicating with them was a big part of her life. She was hospitalized before Christmas and passed as the result of her disease on the first day of this new year 2021.

The family of Maria sincerely thanks the doctors and staff at the Comprehensive Blood and Cancer Center for (CBCC) in Bakersfield for their outstanding attention and care.

Visitation was held at Peters Funeral Home in Wasco, on Wednesday, Jan. 6, from 4 to 8 p.m.; Recitation of the Rosary at 6 p.m. Outdoor funeral Mass will be held at St. John the Evangelist on Thursday, Jan. 7, at 1 p.m. and interment followed at Wasco Memorial Park.