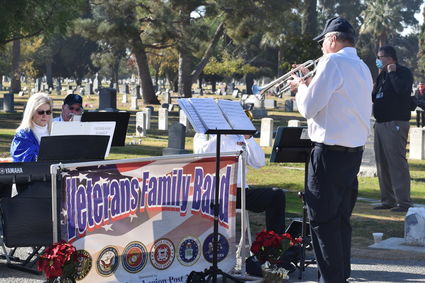 The Veterans Family Band played at the ceremony.

Harvey Havins was a young soldier from North Shafter, one of three brothers who were serving in the United States Military.

On that fateful day in 1941, Havins was serving aboard the U.S.S. Arizona when it was hit by eight armor-piercing bombs, which sunk the Arizona, trapping over 1,100 soldiers with it under the Pacific Ocean, which is still visible to this day at Pearl Harbor.

It is believed that Havins was the first Kern County soldier killed in the World War II conflict.

On Friday Dec. 4, at historic Union Cemetery in Bakersfield, Havins was honored by local veterans groups at their annual Pearl Harbor Remembrance Ceremony.

Havins was one of several soldiers recognized, but Havins was featured this year and City Council member Cathy Prout was presented with a Medal of Freedom and a traditional kukui nut lei from Pearl Harbor, as a representative of the Havins family. These items will be displayed so residents can see them in remembrance of Havins' service to his hometown and the rest of the country.

A big part of the recognition of Havins is due to the work and dedication of local man Ed Gaede, who has been tirelessly researching the soldiers in Kern County who have never made it back to the hometowns, considered MIA, or Missing In Action.

"Havins is considered MIA because his remains never made it back home," said Gaede. "He is entombed with his over 1,100 shipmates on the U.S.S. Arizona, so his family really doesn't have a chance to visit his gravesite here at home."

It is reported that Harvey was nearly one of two Havins soldier to lose their life in that war. Harvey's brother, Oltha, was a soldier and was aboard the U.S.S. Indianapolis when it was attacked and over 1,000 soldiers were lost. Oltha Havins was one of just a few hundred soldiers that survived and made it home. 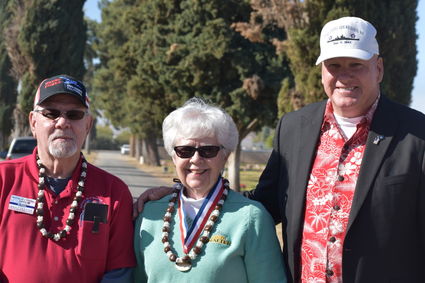 The ceremony was headed up by veterans advocate Marc Sandall, who introduced Major General Mike Lynch, who is a Chaplain, who spoke about that day in December at Pear Harbor. Performances were made by the Veterans Band, who played a medley of the songs from each branch of the military.

Thanks to Gaede, Sandall, and others, all residents will be able to see the history of Kern County veterans, and can see firsthand the sacrifice of its native sons and daughters, as over 82,000 replica dog tags will be on display, each representing a soldier who is missing in action.

Gaede said that at least five of those will be dog tags of Shafter soldiers, including Havins. This room is a part of the Portrait of a Warrior Gallery which is at 1925 Eye St. in Bakersfield.

Gaede said that he has a desire to see that these warriors who have sacrificed their lives have a proper place to be recognized and honored.

"This isn't about me, I am just a man who loves being a part of this amazing cause," he said.