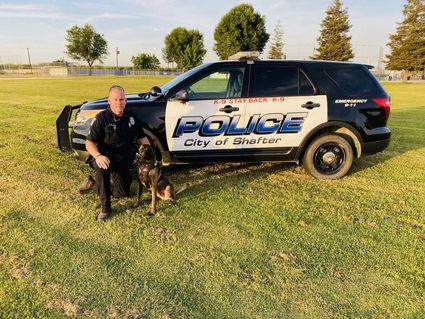 The Shafter Police Department has an active K-9 Unit that has been serving the city since the reinstatement of the program.

The team consists of Senior Officer Kevin Green and his K-9 partner, Ecko. Ecko is a 2-year-old Belgium Malinois born in Germany.

At the beginning of 2020, Chief Kevin Zimmermann presented the need for a K-9 Unit for the department to the City Council. Council members approved and the search was on for a suitable partner. Green was chosen to train with the K-9 partner, which was an intense period that challenged both canine and man.

The training consisted of over 45 days in narcotics detection, patrol training, and obedience training with the Bakersfield Police Department K-9 Bureau. Upon successful completion of training, Ecko was state certified in patrol and narcotics detection in March. Green and Ecko began working in the city in April.

Ecko is utilized to conduct building, area, and vehicle searches for criminal suspects and narcotics. Since the K-9 team has been working the streets of Shafter, Ecko has located narcotics during searches of vehicles, bicycles and residences. Green and Ecko continue their training together on a monthly basis which consists of both patrol and narcotics detection to maintain Ecko's state certifications.

Zimmermann said that the reinstatement of the program is a real benefit for the department, as well as being a useful tool for interacting with the public.

"People and children seem to gravitate to the K-9 units at public functions and I believe that it is a positive asset in the relationship with the city of Shafter, as well as being a valuable tool that aids us in our investigations in drug and theft cases," the chief said.

Zimmermann said that the K-9 team provides a tremendous boost to their ability to locate and apprehend suspects in a manner that protects both the officers and the community from harm.

"The canine's speed, agility, and heightened sense of smell make them a powerful tool in apprehending dangerous criminals and detecting discarded evidence," he said.