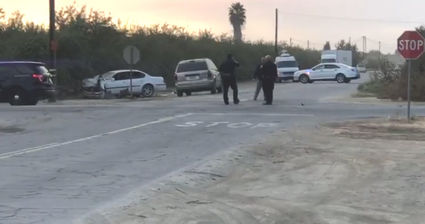 The accident left three people dead and two others injured.

The California Highway Patrol is investigating an accident that left three people dead on Monday afternoon at the intersection of Poplar Avenue and Orange Avenue in Shafter.

According to Public Information Officer Robert Rodriguez, at approximately 4 p.m., a Chevrolet Impala, driven by a 19 year old Shafter woman, was traveling westbound on Orange Avenue at a high rate of speed when it failed to stop at a stop sign at the intersection of Orange and Poplar Avenues, broadsiding an Infiniti.

The driver of the Infiniti and one passenger, both 27 year old residents of Bakersfield, were pronounced dead at the scene. A 24-year-old passenger in the Infiniti was taken to Kern Medical Center with major injuries.

The 19-year-old Shafter woman who was driving the Impala was taken to a hospital where she was pronounced dead. A 24-year-old passenger in the Impala was hospitalized with major injuries. The intersection was closed for several hours as the investigation was conducted.

The victims' identities were being withheld, pending notification of next of kin.

The investigation is ongoing.