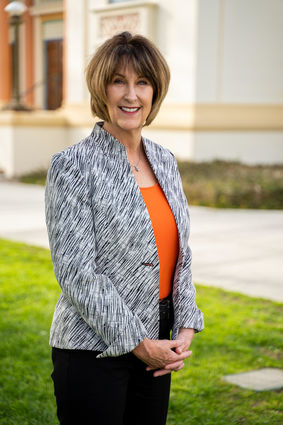 The first time Lori Albrecht heard the sound of "Pomp and Circumstance" was when she walked along the sideline in the processional as superintendent at Wasco High School.

"Turning to greet Mr. Tallon at the goalpost will be a forever memory," she said. "It was such a great feeling of accomplishment."

Albrecht is retiring this December and made the announcement at the September district board meeting.

Born and raised in Michigan, she describes herself as an underachiever when she was in school from grades K-12 and keeps her high school grades framed in her office for proof in case someone doesn't believe her.

"My mom probably heard from teachers that I never worked to my potential," she said. "My oldest daughter was born my senior year of high school and so my hopes of going to college seemed out of reach at the time."

Albrecht says that her mother has been her greatest inspiration.

"I admired her patience, work ethic, integrity and great sense of humor," she said. Albrecht's mother graduated from the University of Michigan before she was born and switched careers to become the clerk of the course at several harness racing venues in Michigan.

"She was definitely a trailblazer for women in the industry at the time," she said. "She was the first woman in the United States to hold the position."

Albrecht also cites former Wasco High School Superintendent Liz McCray as another inspiration. McCray saw something in Albrecht that she didn't see in herself and encouraged her to get her credentials to pursue an administrative position.

McCray recommended that Albrecht apply for a coordinator position that was being offered in the district and when McCray became superintendent, Albrecht followed.

Albrecht lists several significant accomplishments during her time at the district beginning with a continuous school improvement journey with a focus on system alignment, which began about 12 years ago.

"Research says that it takes seven years to see the results of changes that are made," she said. "So continuity in leadership is extremely important to stay on course."

She also cites the district's ability to shift to one of the state's new indicators of success for high schools, which is college and career readiness.

"When North Kern Vocational Training Center dissolved because of lack of funding a couple of years ago, we reimagined what a new program might look like using the new state requirements," she said. "The skills learned in vocational training are now embedded into new Career Technical Education (CTE) courses that give students both the hands-on application of skills needed to do a job as well as the science required within the occupation."

She said that the district has reimagined how it serves the special education students and the district uses a new model program that has served as an inspiration for several other high schools.

Albrecht said she hasn't even touched on how the district has improved its adult education expansion program and education improvements at Independence High School. She takes great pride as the person who allocated an Arts and Music Grant several years ago to fund the Steel Drum Orchestra. Drama classes were also brought back to Wasco High a few years ago.

Albrecht is quick to remind everyone that she did not do these things all by herself. She credits her predecessor Liz McCray as well as her entire staff at the district who enabled a cohesive leadership team that worked well together.

Albrecht describes herself as having a great sense of humor, even if the joke is on her.

"I think laughter is healthy and I am one of those people who can laugh till they cry," she said. "Life is too short not to laugh."

When she retires, she is looking forward to life returning back to normal after the covid-19 pandemic so she can travel to watch her grandson play football at Arizona State University.

Albrecht hopes that her story will inspire adults to go back to school if that was their dream.

"It's never too late to learn something new, even if it's just to pick up a new hobby," she said. "I used to be embarrassed to tell my story based on unfounded fears that I would lose my credibility with my peers, or be criticized for being such a young mother. Over the years I have learned that we all have a story, and when our stories are shared and then woven together with respect and understanding, I find that although we are each very different, together we weave the fabric of our community."