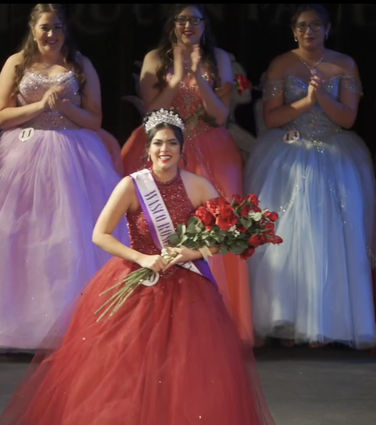 Isabella Garcia was crowned the 2020 Rose Queen/Miss Wasco Thursday evening during a stunning and historic pageant.

Tailored to meet the covid-19 restrictions placed on indoor gatherings, the pageant Sept. 10 still had its air of splendor as the contestants took to the stage.

While the location was kept a secret, once the program began, it didn't matter where it took place because the stage was magically decorated to reflect this year's theme, Under the Sea.

Muted shades of blue, pink and green were highlighted in the girls' costumes throughout their performances. Dance movements were also soft and flowy, much like the movements of a Hawaiian hula dancer.

Each girl introduced herself and shared her mermaid name with the attendees. The talent portion of the program began shortly after.

During the talent portion, several girls shared Mexican dances highlighting their culture while a couple displayed their artistic talent on stage painting a picture to music. One girl performed a comedic oral speech while another performed a dramatic one. In addition, a couple of girls danced to their favorite tunes. Garcia performed a toe-shoe ballet dance as the Sugar Plum Fairy from the Nutcracker Suite.

What the pageant lacked in audience participation, it was not reflected by the response given each candidate as she walked across the stage. Each candidate was enthusiastically applauded after they approached the front of the stage to show off their dress.

Once the pageant was over and the talent had been performed, the time came for the announcement of the scholarship winners and the name of this year's Rose Queen/Miss Wasco. Garcia took home the title of 2020 Rose Queen/Miss Wasco and Talitha Arellano was 1st Runner Up, Christianne Ray Hernandez was 2nd Runner-Up and Idaly Flores was 3rd Runner-Up.

Mistress of Ceremonies for the evening was Tyrah Majors. Born and raised in San Diego, Majors is a journalist, talk show host and author of the children's book, "Grammy and Me."

Majors wakes up at 4 a.m. every day to report and anchor the morning news at KBAK Eyewitness News in Kern County. She says it's an honor to be able to make the community smile as they start their day. Previously, she worked at NBC in Los Angeles and San Diego, FOX 5 San Diego, and worked as an entertainment reporter. She holds a bachelor's degree in journalism from California State University, Fullerton, and a master of science degree in journalism from the University of Southern California. Her "Major Moves with Tyrah Majors" digital talk show highlights millennial entrepreneurs.

If you have a story for Tyrah or just want to say hi, feel free to reach out to her on social media @tyrahmajors.

There are so many people to thank for the production including Pageant Director Debbie Mehlberg, Pageant Coordinator Hailey Coyle, Nicole Sanches, Sydney Mehlberg and Samantha Wymer. This core group of women assisted in the choreography and organization of the pageant.

The luncheon provided on pageant day was coordinated by Lori Kibler. Tina Newman and Betsy Rogers were in charge of tickets. The process of purchasing a ticket through Venmo was uncomplicated and each ticket holder received an email providing the link and the access code to the event. 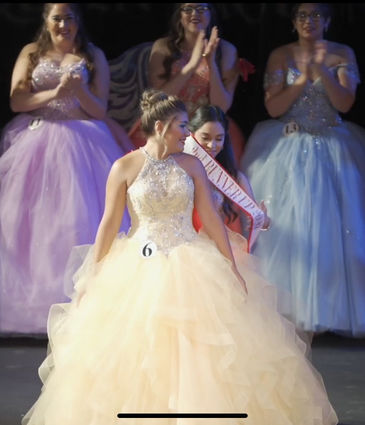 Talitha Arellano was 1st Runner Up

Without the stage crew of Ben Coyle, Jeff Mehlberg and Nick Sanchez, the event would not have taken place. Also part of the stage crew and in charge of lighting was Brent Starrh.

The judges' coordinator was Amanda Rodriguez and the balloting was created by Evan Schulte.

The pageant would like to thank Vince Martinez for providing the photography of the contestants and of the pageant during this evening.

In addition, Freestyle Entertainment is thanked for another successful year of providing great entertainment.

Other contributors include Grace Community Church and the Starrh family.