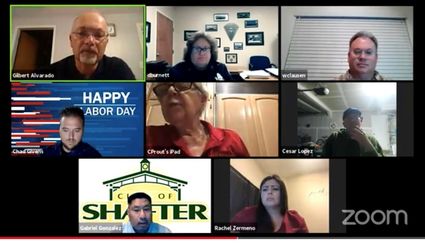 The Shafter City Council discusses approving the tract map during its virtual meeting.

The City Council has approved a letter opposing widening the scope of what peace officer personnel records can be disclosed.

The letter, which will be sent to the state Sen. Nancy Skinner, argues against Senate Bill 776. In it, the council states the measure is excessive in the types of personnel records it makes subject to disclosure and is overly punitive when it comes to the fines imposed for violations.

Currently, records of incidents involving any use of force by a peace officer are to be disclosed only if there were sufficient findings that the officer was not within department guidelines.

The proposed bill would open any records of reports of force to be disclosed, even if it were determined that the officer was exonerated.

According to the council's letter, "the release of officer records for incidents involving any use of force, especially those in which the officer is entirely within departmental policy, can lead to misperceptions about an officer's conduct, resulting in flared tensions between law enforcement and community members instead of effective dialogue."

Fines for records not being disclosed are proposed at up to $1,000 per day for each day beyond 30 days that records are not disclosed. The council stated that it would cost extra to handle an increase in the amount of requests for records including increased staff hours and in additional training.

Also at its meeting, the council approved a tract map that will bring new residential development to East Tulare Avenues and North Reiker Street. There are 10 lots on the parcel, with each consisting of about 11,000 to 12,000 square feet. There is no plan yet for what the price range will be for the homes.

Developer Vernon Gunter, of Bakersfield, requested the tentative tract map. According to the Planning Commission's Wayne Clausen, the members of the City Council will have input on the size and use of the tract.

Council members had an opportunity to ask questions about the tentative map. Council member Manuel Garcia commented that he hopes this development is different than more recent developments, which have stalled.

"I hope and pray that Mr. Gunter has the means to follow through on this project. The city of Shafter really needs more homes available," said Garcia.