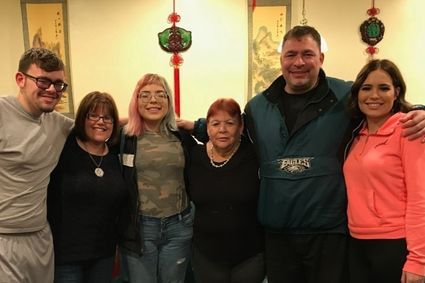 After experiencing a week of continual coughing and lying delusional on the floor, on Aug. 3, Fernando Alaniz was taken by ambulance to Mercy Southwest for breathing problems.

Alaniz had been experiencing a week of feeling sick and progressively worsening with a cough that wouldn't quit. He was tested for covid-19 and the doctors discovered his blood sugar was very high. He was told he had diabetes and was close to being in a diabetic coma, which could have happened at any moment. Alaniz was immediately started on an IV. At the same time, his test also came back positive. With the diabetes and his underlying condition of asthma, this was not a good sign.

After being diagnosed, he was in the ER for almost a week until they had to make room for him in the Intensive Care Unit.

While he was in the ICU the week of Aug. 10, he was put on a ventilator because his lungs were not able to function on their own. He remained in the ICU until his oxygen levels were more stable. During the week of August 17, the breathing tube was taken out.

While this was going on, chest X-rays were taken several times a day as his lungs showed fluid in them. On Aug. 23, Alaniz was moved to a new unit in the hospital called telemetry, where he is still being cared for.

In this unit, he is monitored around the clock for any changes. At one time, there was a sepsis alert so they had to do extensive blood cultures. "The doctors were searching for what caused the sepsis alert," sister-in-law Cathleen Gotsch said.

As of Aug. 30, Alaniz's oxygen level was at 96%. He also continues to receive strong antibiotics and around 40 liters of oxygen. "His oxygen level needs to be down to 4 to 5 liters in order to be transferred to the long-term care facility to begin rehab and therapy," Gotsch said. "He continues to receive lung X-Rays which monitor the bilateral covid pneumonia he is fighting."

Alaniz will have to relearn how to swallow due to damage to his trachea and vocal chords from the intubation. "As of Aug. 27, he is still unable to talk, but his blood sugar is normal," Gotsch said.

She said his coloring is returning, and the nurse who has been working with him waves to his wife during his FaceTime sessions with his wife, Christine, and children. "He is able to follow very simple commands and respond with head nods, but still has a long ways to go," she added.

Gotsch also said he should be able to be moved to a long-term health facility in several weeks where he will begin physical, respiratory and speech therapy.

Alaniz has a very long road to recovery considering he is still in the telemetry unit. The beginning of his journey to recovery is still unknown.

While the Alaniz's are insured and currently receiving assistance through the CARES Act and through benefits from their employers, both are teachers and those benefits will come to an end before all of his therapy and recovery are complete.

Because of Fernando's illness, Christine has not been able to return to work and wants to meet her virtual class and get her school year started in order to teach her students. But with all of his daily medical decisions, updates and insurance coordination, she is not able to prioritize teaching at this time.

Fernando also has a long road to recovery ahead of him. His wife isn't sure of the time frame when she will be able to support her students' needs as their daily teacher.

Alaniz is from Guadalajara, Mexico, and immigrated to Wasco with his mother and family when he was 5 years old. His family made Wasco their home and he attended Karl Clemens Elementary School, Thomas Jefferson and Wasco High, graduating in 1991.

He attended Bakersfield College for a year and then in 1992 he was recruited to play football at McPherson College in McPherson, Kansas, where he met his wife,

Alaniz returned to California to continue his degree. In 1996, Fernando and Christine married and had their first child, Sara.

He took a pause in his education to take a job as a student affairs specialist at Delano High School. He was there for two years and then was hired by the Kern County Sheriff's Office in the technology department. He and Christine had two more children, Samantha, and Fernando.

Alaniz finished his degree in Criminal Justice Pre-Law but was really passionate about computers and about teaching. He left his job at the Sheriff's Office and started to substitute teach while completing his master's degree in computer science engineering.

Alaniz was in his last two courses at Walden University online and was slated to graduate in December. But then, covid-19 struck, so those plans are on hold for a long while.

He is a devoted husband and father and is passionate about his family and teaching technology. "All who know him know he is an extremely kindhearted man of unwavering faith who would give you his shirt off his back," Gotsch said. 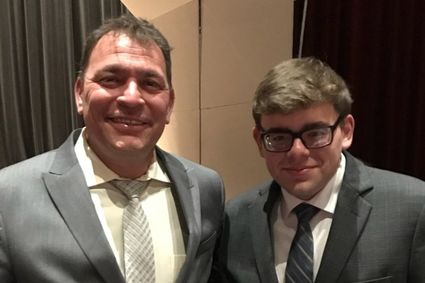 Father and son at the Bakersfield Symphony in February.

Since March, Alaniz and his family have attended online Sunday church together and as a family, they pray together. "Prayer has been a part of Fernando and Christine's entire marriage and they have made it a daily priority," Gotsch said. "The life and family Fernando and Christine have built mean the world to them both."

Their daughter Sara has "left the nest" and is currently out on her own. Daughter Samantha is living at home and has entered the workforce. Youngest son Fernando recently started his senior year online at Wasco High School online.

The family asks for any support to relieve the financial burden of Fernando's recovery and rehabilitation to allow him and Christine to focus their time and energy on restoration of health and security of their family.

A GoFundMe page has been set up by Gotsch in order to support both their medical and rehabilitation costs over and above what will be covered by insurance and is set up to provide general household assistance.

To see updates on Fernando's battle, please visit the GoFundMe page at https://gf.me/u/yvdvfj