WUESD successful at distance learning for first week of school 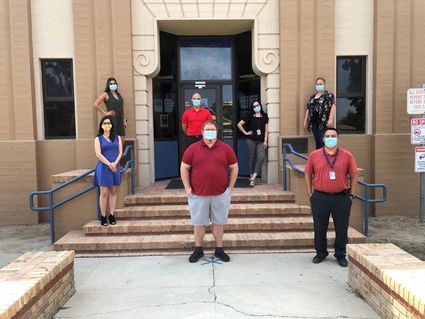 So far, the local schools are pleased with the newly created distance learning being delivered to the students, and they are very pleased with the responses by students engaging in the new system of attending school.

Updates at the following sites have been collected:

Torres admitted he had a lot of concerns about the beginning of school once the state was mandated to distance learning after opening up for a couple of weeks.

"We were going to have a rotation schedule in all the schools," Torres said. "We had provided teacher training and professional development services by Zoom.."

Torres said district staff was worried about student safety and students getting exposed to the coronavirus. He added that the district purchased several hotspots for families with no internet service. "Hotspots need a cell phone device and the district has a good handle on that," he said.

Luna said the first week of school was great. "We are ready for the second week of distance learning," he said.

Luna was proud to announce that the school had 93% attendance. "Our students are logging into our distance learning platform and engaging in live online learning," he said. "We still have a number of challenges ahead of us, but we have a resilient team at Palm Avenue."

Luna also said the teachers are working hard every day to ensure that students are engaged and connected.

He said one concern is that not everyone has internet access in the district."

"The WUESD is working diligently district-wide to make sure that all students have a Chromebook device and have internet access," he said.

Palm Avenue daily schedules for the first quarter are shown as 6th Grade as Document #1 and 7th and 8th grades as Document #2.

"School started exceptionally well under the current circumstances," Pollard said. "Our attendance was over 93% for the first week."

Pollard said it was sad not being able to see the students on campus last spring, "but seeing them so engaged in distance learning sessions with their teachers is still very fulfilling."

Pollard also said students want to learn and want to be in school.

If you happen to need to stop by the school, secretary Kristi Vaughn, secretary Rebecca Pallares, clerk Patty Munoz, liaison Mary Lou Gonzales, health clerk Toni Beltran, librarian Patricia Torres, school counselor Maribel Esquivel, academic coach and Pollard are all working diligently to ensure that students have what they need to be successful in the distance learning environment. "We anxiously anticipate the return to in-campus instruction," Pollard said.

Goodwill said attendance averaged around 87% for the first week for grades PK-5. "This is phenomenal," Goodwill said. "All grades except for PK/K were given Chromebooks and students and parents both were obviously excited about engaging with their teachers and peers as was reflected in the attendance as well as the academic engagement of distance learning."

Furthermore, she said, teachers, staff and administrators were excited to see school begin.

"It has been a challenge; however, we are tackling it a lot better than we did in the spring," she said. "The district had been planning and preparing since then, and we have gotten off to a great start."

said that the school had 97% attendance during the first week.

"We are so proud of our parents because we had 96-97% of our parents pick up their student's Chromebook and packets," Chairez said. "The only problem we've faced is when the internet gets overloaded and the district can't control that – the internet providers do."

Chairez also said the school has been able to maintain 94% attendance since the first week of school.

Breakfast and lunch are being served Monday to Friday from 10 a.m. to noon by drive-thru only from the four elementary sites.

Arellano also said that before the first week of school, the school site set up specific dates for distribution of Chromebooks, student schedules and packets. "All students are receiving all core subjects, an elective and P.E. via distance learning," he said. "Apart from a few technological issues, the majority of our students have been able to participate daily in distance learning."

Arellano wants to assure parents the district is prepared and committed to supporting and providing all students with a positive learning experience; however, he stated that this best can be accomplished by working together.

Tallon said that the first week of school was very successful.

"There was a successful distribution of 500 new Chromebooks to 9 graders and supplies to the rest of the students," Tallon said. "10-12-graders already had Chromebooks and received supplies."

"Our schedule is working well," he added. "You can find it on the school website."

Tallon also said the students are joining their teachers in real time.

He mentioned that not having students and teachers in their normal environment is a challenge. "We are used to working closely with students and staff," he said. "And you lose that element." But he is proud of the students and staff for being able to work through the challenges and starting the school year with live instruction and other supports that are needed for learning. 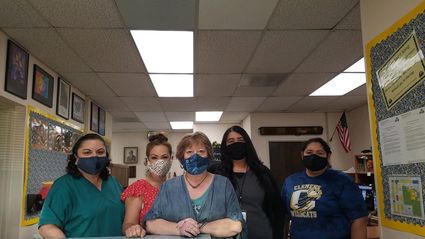 Prado said the first week of school went as expected.

"One hundred percent of our students participated in the registration and orientation process," Prado said. "Both students and parents knw our expectations, which were explained during the intake meeting."

In addition, each student met with the school's team to discuss WIHS expectations. The counselors at the school will continue to have virtual counseling sessions available every afternoon.

"The entire staff at WIHS has been working hard and are excited about the new school year," he said. "During the first week, teachers went over and above to get our students comfortable in this new virtual classroom setting."

"It's been a great start for the school year for Independence High School," he said. "Go Falcons!"