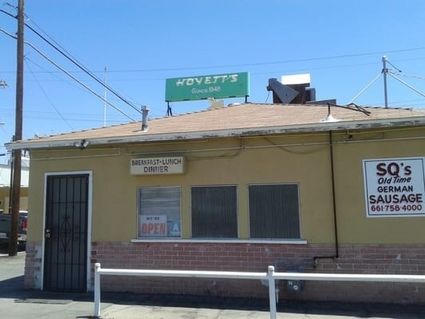 The covid-19 pandemic has another local business as the popular Hoyett's Sandwich Shop, at 727 6th Street, said on its Facebook page it has been sold and will be closing on Aug. 15.

"I've been struggling with the right words to say but here goes," owner Kevin Newcomb wrote in the Facebook post. "I would like to thank each and every one for the past 10 years that have supported Hoyett's, Especially with these last months with the closing and opening and closing again."

Newcomb has not made any definite plans for the future. "If everything goes as we planned, Saturday the 15th will be our last day," he said.

He said it was not an easy decision to sell. "Hoyett's name will remain with us so maybe in the future you will see us again," he said. "We are donating the sign to the Kern County Museum."

Hoyett and Easter Smothers owned Hoyett's until 1996 when employee Terri Anderson bought the restaurant from them.

In an earlier article, Anderson said she owned Hoyett's from 1996 until 2010. "I've worked here since 1983," Anderson said then. "I sold it to Kevin Newcomb and told him if he needed me, I would be available to help him out."

Hoyett's was a popular spot with celebrities, too.

"American television personality Huell Howser stopped by on his California Gold tour years ago," Anderson said. "We also had a visit from country singer Victor Sands. Howser used to come by every morning when he was here. He really enjoyed the chili."

Because of the pandemic, Hoyett's changed its hours to Monday-Saturday from 7 a.m. to 1 p.m.

Like many other family-owned business, though, Hoyett's suffered during the lockdown when non-essential businesses had to close.

On May12, 2018, Hoyetts celebrated its 70th year in business with a big barbecue. Guests were invited all day to come in and sample their burgers for free.

The loss of Hoyett's is an example of how devastating the lockdown has been for small business owners, who are a large part of the city's local community.

During regular times, several locals would drive to Hoyett's on the weekend with their classic cars to show off in the restaurant parking lot. One such couple was Hoot and Christine Gibson.

Hoyett's has also been a breakfast gathering place throughout the years. 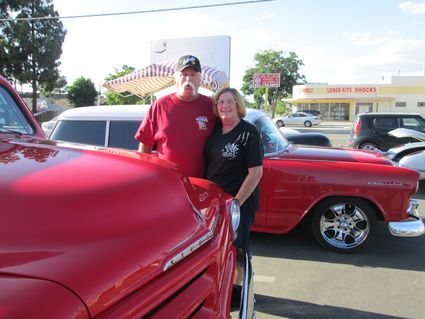 Hoot and Christine Gibson stand next to their classic truck.

The word is that Hoyett's will become a hamburger spot.

Diners Delia Olquin and Mary Pallares recently had a lot to say about Hoyett's. "They used to make a Baker's Special, a burger with meat and you put all the fixings on it," Olquin said. "Hoyett's has the best chili, it's always been good."

A server for the past eight or nine years, who asked not to be identified, said she will miss seeing all her friends, who are now like family.

"I want to thank everyone who has supported us throughout this unusual time," Newcomb said. "We appreciate everyone's loyalty in good times and during the tough times."

I recently visited Wasco, once again, and was disappointed to see a landmark close its doors. I was able to photograph it from a decent angle about two years ago. I photograph towns on my roadtrips and find your community to have all the right ingredients... hopefully, the local government understands the historic nature of the place and does not commit to some fangled urban design refresh (based on my experience as an architect). Thanks for having the informative article... albeit I'm late on commenting!