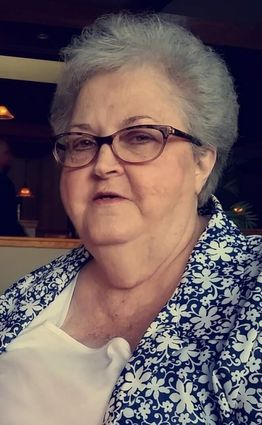 Kay began working at S&S Cafe starting at the age of 14. Just prior to marrying the love of her life, Artie Dean Long, on Nov. 19, 1966, she was a shift supervisor at the Flint Hills Hotel and Restaurant. Working in the kitchen, Kay looked out into the restaurant and saw a handsome man and her girlfriend said, "I'm gonna marry that fellow," and Kay responded with "Not if I do first."

Kay is preceded in death by her parents and her brothers Bobby, Tony and Michael (stillborn). She also has three babies in heaven due to miscarriages. Kay has four living children: Teresa Lynn Manus of Jewel, Kansas, Judith L. Lauderdale, Gary D. Long and Marcus W. Long all of Shafter.

Kay, along with her husband, began attending the Salina (Kansas) Free Will Baptist Church, where they accepted Jesus Christ as their personal Savior and began in the ministry together, Dean as an educational director/associate pastor and Kay as his right hand. They served in the Salina FWB Church from 1973 until they moved to Bakersfield in July of 1984.

The move from Kansas to California was extremely hard for Kay. She left the state she was born in, along with her mother and several siblings, and moved to a state that was very different, but she followed the Lord and her husband.

Dean was the bus director at the First Free Will Baptist Church under Pastor Claudie Hames. Although they were only employed with the church for 19 months, they made many wonderful friends.

In February of 1986, Kay followed her husband to the Shafter Free Will Baptist Church, as he was called to be the lead pastor there. Kay was involved in many aspects of the church, including being the pastor's wife, visitation, Bible studies, church fellowships, teaching young children in Sunday School and even being her husband's secretary for a short time. Although she never spoke formally at the church, she was always willing to share her testimony of how the Lord had rescued her and redeemed her. She loved the Lord with all her heart and was never shy in sharing.

She had the wonderful opportunity to watch and care for all the grandsons and loved having her granddaughter, Abigail, over any time she could have her. As Abigail grew older, Grandma Kay would have her come over during Christmas break and make cookies, candies, fudge and many other wonderful treats to make the gift boxes/baskets that she thoroughly enjoyed giving out each year. She always tried to include Judith, Melissa, Shandy and Liliana in this adventure.

One of Kay's greatest talents was decorating cakes. She made many wedding cakes through the years. She gave classes in cake decorating. For a short time she had a little craft and cake decorating shop in Shafter.

Kay died peacefully on Aug. 6, 2020, at Rosewood Health Center in Bakersfield after many years of illness. Her daughter and son, Gary, were by her side as she left this earth and entered her eternal home, heaven. Our family would like to acknowledge Rosewood Health Center who took such wonderful care of Kay and Optimal Hospice who joined her health team in the last few days and were extremely considerate, informative and caring. We are forever grateful.

A celebration of life for Kay will be held at the Shafter Cemetery on Saturday, Aug. 15, at 10 a.m. Everyone is invited to attend.

In lieu of flowers, donations may be made to Shafter Free Will Christian Academy, 155 Redwood Drive, Shafter, where all of her grandchildren attended and graduated, along with her great grandchildren that are entering preschool there this year.