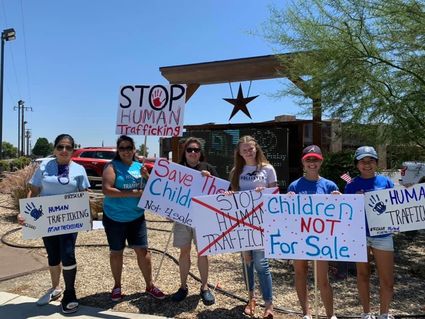 Back in 2011, President Barack Obama signed a proclamation dedicating a day to fight the issues of slavery and human trafficking. Richland Board of Trustees member Melissa Dewitt led a Shafter contingency that joined many other groups around the nation calling for the end of human trafficking.

"This is an important issue that affects so many families each year," said Dewitt. "It is important to do something that will make a difference."

Thousands of men, women and children end up in the hands of traffickers every year, often through being tricked and misled to believe they are being taken to work that will make them and their families better off, or through force.

There are even reports of very poor families selling children in order to survive. There are many ways people get caught up in trafficking, but the result is almost always the same: They end up being used and abused. 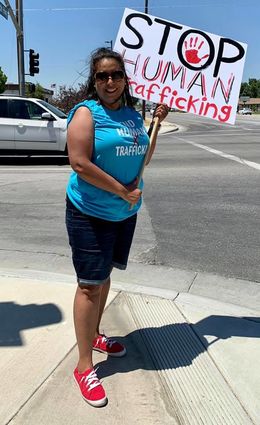 Melissa Dewitt with a sign in support of trafficking awareness

Trafficked people are often forced to work, doing hard labor or prostitution. They usually have their documents taken away and are warned of terrible punishment if they try to escape.

A global problem, trafficking has been given a global platform as the United Nations organized the World Day Against Trafficking in Persons.

Human trafficking is not a new subject for Shafter. The city played host to Sean and Kay Levesque last year as they brought their fight against the problem to the First Southern Baptist Church for a conference on the issue. Levesque and his family sold all of their possessions and bought a motor home that they travel around the country in, raising awareness about the abuse that millions of people worldwide suffer annually.

"Human trafficking is a problem that affects everyone, no matter your social class, ethnicity, age. We need to eradicate this problem in our nation," said Levesque.