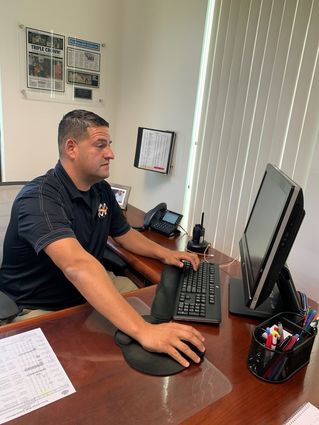 Raised in Wasco, Russel Prado knew from his freshman year in high school that he wanted to be a teacher and teach in his hometown of Wasco.

Prado moved out of Wasco in April of his freshman year at Wasco High School and finished high school in Bakersfield. Because of the decision he made during his freshman year, he always knew he was going to return to Wasco and teach.

"I love Wasco," he said. "You knew everybody and that was great."

After high school, Prado was offered a football scholarship to St. Mary's College in Moraga, Calif. But even the beautiful weather and landscape of northern California could not entice him away from his hometown of Wasco.

Upon returning to the central valley, Prado continued his education at Point Loma University and received both is teaching and administrative credentials.

After graduation, he returned to Wasco and was offered a long-term substitute position at Wasco Independence High School, which lasted one semester, during which he taught electives. He continued his career with WIHS for 13 years.

During his time at WIHS, he helped create a program where students would spend a week of orientation learning how the school worked, what was expected of them and what they needed to achieve during their time at the school. This program was set up to provide an ongoing dialogue among the administration, teachers, and students so that everyone knew what was expected of them.

Following WIHS, Prado moved over to Wasco High School where he was football/wrestling/basketball coach for 12 years. He was the assistant principal of student affairs for the last four of those years.

This is Prado's first year as principal at WIHS. Something of a workaholic, he says that he never stops working. "I'm on 24/7," he said. "If you cut me, I bleed orange and black," he added with a laugh. "I'm excited for this year to open and I have big shoes to fill following Martin Lonza,"

Prado said he has already worked with half the staff at WIHS and is excited for the challenge.