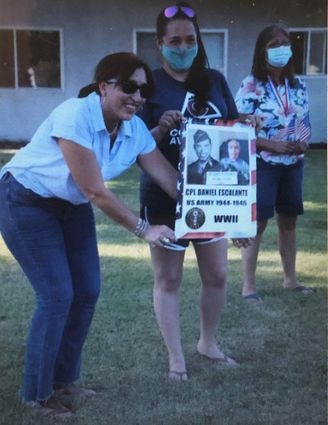 Granddaughters Julie Ann and Shannon with daughter Dolores, holding a tribute to Escalante.

A local World War II veteran was honored last week at Carrington House, where he resides. Danny Escalante was presented with a number of mementos for him and his family.

Escalante, who served in the Army, and his family are part of Shafter's rich history, with Danny being known throughout town for his kindness, generosity and character.

Escalante's daughter said her father was chosen to be a part of the Honor Flight of Kern County, which helps veterans visit the World War II Memorial in Washington, D.C. However, because of the pandemic and Escalante's declining health, he was unable to make the flight.

In its place, Honor Flight of Kern County led a parade to Carrington in Shafter. Escalante was unable to go outside for the ceremony but was well represented by numerous family members and friends including his sons Richard and Tim, daughter Dolores, granddaughters Julie Ann and Shannon and many others.

Escalante was presented with an American flag that was flown in Washington in his honor by Minority Whip Kevin McCarthy, as well as medals including a Fallen Hero Medal. On July 16, a number of veterans, as well as friends and family, gathered to honor Escalante. 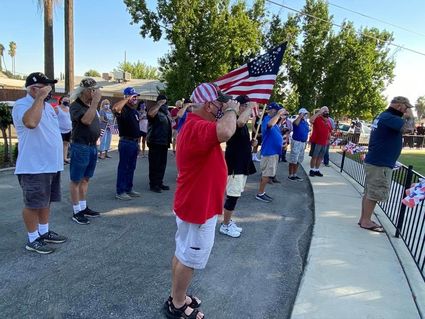 A group of veterans give a salute in honor of Escalante.

Julie Ann said she is so grateful for Kern County Honor Flight. "It means the world to us," she said. I wish my grandpa could have seen it, but I am so grateful."

Escalante worked for Nikkel Ironworks for 55 years, the only break being the three years he spent in the service. His job was waiting for him when he came back thanks to his boss and good friend Jack Nikkel, and he worked there until he retired. Escalante was able to make almost anything out of metal. It was said that if you could show him a picture or a drawing of something, he could build it.

Escalante was honored for his service to not only his country but to his community as well.

His son Richard said that he believed his dad held on just for this day. "I really wish that he could see this. I am just amazed at what happened here today."