Back to square one 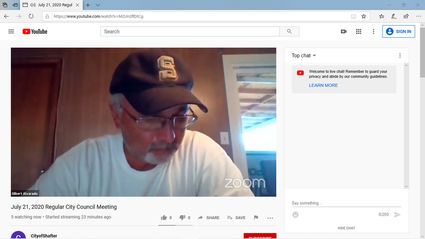 Mayor Gilbert Alvarado discusses with the other members about the changing of the meeting times to 6 p.m.

City of Shafter buildings will be closed to the public again beginning Friday, July 24. City offices will still be open and customers will be served using the alleyway behind the building, much like a drive thru service. The Shafter Building Commission will still be serving the public with building inspections and other essential services.

City Manager Gabriel Gonzales said at the recent City Council meeting that with Kern County being put back on the watch list, there will also be closures of most houses of worship as well as non-essential businesses such as salons, movie theaters and gyms. Gonzales said that the council is preparing an informational piece to go on social media.

During public comment at the meeting, the City Council listened to impassioned pleas from Shafter residents concerning the closure of the Shafter Branch of the Kern County Library System. Residents Bill Wolf and Stan Wilson wrote letters to the council asking it and the city's administration to work with 4th District Supervisor David Couch to find a way to open the Shafter Library.

Wilson said the Shafter branch is one of the least expensive branches to operate in Kern County and that it has a unique partnership with the Shafter Learning Center, which helps the library be one of the busiest libraries in the system.

David Frantz, director of the Shafter Learning Center and the Education Partnership program for Shafter, said he is working with Shafter Library Director Ethan Picman to let the county know how vital the library is to the community.

Mayor Pro-Tem Cesar Lopez said he would be willing to contact and work with staff on contacting Couch's office, as well as the Kern County Libraries administration in hopes of reopening the branch.

All of the City Council members said they would do whatever they could to help make a case for the library reopening.

Council member Cathy Prout asked if they would like the council to write individual letters or one letter with their signatures. "We can also invite Supervisor Couch to our meeting on Thursday to be included in the discussion about our library," said City Manager Gabriel Gonzales.

The participants will discuss ideas for various activities that will keep the community and its children engaged during the pandemic.

In other action, the council approved $50,000 to be used to complete the Public Works Department's relocation to the new Corporation Yard off of Commerce Way. The move is almost complete, with the exception of the fleet maintenance shop, which is still at the old yard. As constructing a new building would not be cost effective, a short term solution was approved. The Public Works Department will move their shop into an existing structure on the new property. This would necessitate the purchase of one new vehicle lift system to go with the one they have currently that will be moved to the new site.

"This solution makes a lot more sense and will work well for us in the short term," said Public Works Director Michael James.

Gonzales also brought before the council a proposal to change the meeting times of City Council meetings to 6 p.m. from 7 p.m. Gonzales said Shafter is one of only two agencies in Kern County that have a 7 p.m. starting time, the other being the Kern County Planning Commission. Gonzales said that the 6 p.m. starting time would still allow residents who want to attend meetings to get off work, grab a bite to eat, and still make it to the meeting. The idea was approved and an ordinance will be prepared that will be presented to the council at its next meeting.