Tigers roar back to the mats 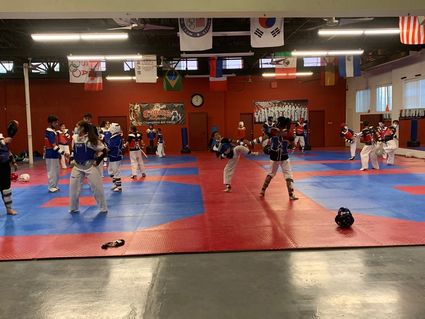 Tigers' Taekwondo, with studios in Shafter and Wasco, were back in action as training sessions began on Monday June 15. The studios had been closed for almost three months due to the coronavirus pandemic.

Returning students were met with a different setup, incuding a hand sanitizer station at the entrance and a laser thermometer that takes every student's temperature upon entering the building. A reading that is not within the normal range requires the student to return home and resume training when it is back to normal.

The students also are required to wear face masks. "This is just common sense," said owner Rigo Solario. "The safety of our students and our staff are the most important thing," said Solorio.

"We are so excited to be back open, but we also want to make sure that we are doing it the right way."

The announcement of the closure back in March caught the students and parents by surprise. Several of the parents tried to arrange smaller class sizes, and scheduling more classes instead of closing the studio temporarily. Solorio considered those options, but ultimately decided that the safety of his kids was the main objective. "We might have been able to try it, but it just wasn't worth the risk of any of my kids or staff getting sick," he said.

The studio is big enough to have students spread out enough to meet the state's requirements. "We have numbers on the mats where each student is to be stationed at. There is even an extra foot of clearance above the requirements." 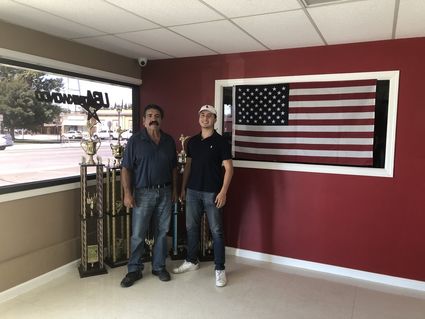 Rigo and Brian Solorio with a small array of the studio's collection of trophies.

With the return of the training comes the expectations of the competitive tournaments resuming as well. The team has several competitors that have qualified for different tournaments on the regional, state and national level, but it is still unclear when the competitions are going to take place. According to Rigo's son Brian Solorio, a teacher for the studio and a competitor himself at Cal State Bakersfield at the upcoming Collegiate Championships, the studio has a student, Kaitlyn Taberna, who is ranked #1 in the nation in her weight class and has qualified to represent the United States in the World Championships. "There is still debate going on to the date and site of the World Championships. Originally, they were to be held in September in China. This is up in the air because of the safety situation."

The elder Soloria said that they have seen about 35% of their students return this week, with several on vacation or in Mexico. They expect to be back up to around 70% by the end of next week.

With the expansive area they have in the studio, and to help those in the community that might not have been as active during this time of quarantine, Brian Solorio is offering a FREE fitness class for the community. "It is a total body workout designed to help get you moving and healthy. All fitness levels are welcome. The first class is scheduled for June 29 at 8 p.m. For more information, call Brian at 661-910-2332.