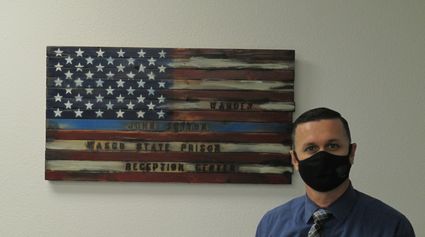 A one-on-one interview with staff at the Wasco State Prison was discouraged due to the COVID-19 virus pandemic; however, an online interview provided answers to many questions.

Joshua Farley, correctional lieutenant, administrative assistant and public information officer at Wasco State Prison was able to answer several questions posed to the institution regarding how the prison has been handling staff and prisoners during the pandemic.

"CDCR's number one priority is the health and safety of all those who live and work in our state prisons," Farley said. "We have taken extraordinary and unprecedented measures to mitigate the Covid-19 pandemic."

He explained that to help maintain social distancing and minimize the spread of Covid-19, California Department of Corrections suspended visiting statewide and stopped accepting people from county jails for more than two months.

"In April, CDCR successfully completed its effort to expedite the release of approximately 3,500 inmates to increase space within our institution statewide, particularly in dorm settings;" he said. And, CDCR moved approximately 1,900 inmates from dorm-living environments to other vacant spaces within our institutions to increase physical distancing."

He also said that health care staff at each facility make multiple rounds daily and conduct health screenings of all inmates to quickly identify anyone with new symptoms. All health care services, and medication are still available to incarcerated people.

Farley also said that at all facilities, CDCR conducts verbal and temperature screening of all those entering state prisons.

"We have provided all staff and the incarcerated population with reusable cloth barrier masks and the type of alcohol-based hand sanitizer recommended by the Centers for Disease Control and Prevention, Farley said via email. "We have also been providing education materials and streaming CDC videos on the inmate television network."

Farley added that every decision has been made with operations, public health, and health care experts working diligently side-by-side.

Figures released on Tuesday broken down by employee, a prison-by-prison breakdown of Covid-19 positive diagnosis shows that four employees have tested positive at Wasco State Prison and three of those have returned to work.

Five prisoners have tested positive for the virus, and all five are still incarcerated in the prison.

Farley added that results for incarcerated people and staff allow the prison to make rapidly informed decisions regarding housing, staffing, and treatment.

WSP has established certain housing units for inmates requiring isolation or precautionary quarantine in accordance with CDC guidelines for prisons. "Men in this unit are monitored daily by infectious disease staff," Farley said. "Those with symptoms will be treated and housed in the prison's Correctional Treatment Center or at an outside facility as needed."

Also, all housing and common areas are sanitized multiple times per day. Incarcerated prisoners are provided with extra cleaning supplies to allow them to keep their living area clean.

"CDCR and California Correctional Health Care Services staff at WSP are continuously working with public health and health care experts to address this unprecedented pandemic and protect those who live and work in our state prisons."

Additional information on the CDCR system and its preparedness and response to the Covid-19 pandemic is available at cdcr.ca.gov/covid19.

Grandson Brandon Bl4854 tested positive yet they refuse to mask, give sanitizer nor medically take care of. Having trouble breathing. Cell air is blowing heat and they gav e empty cells but refuse to move him. Blood pressure taken twice daily nothing else. Help fix thus problem. Staff not masked nor any sanitizer available for anyone.