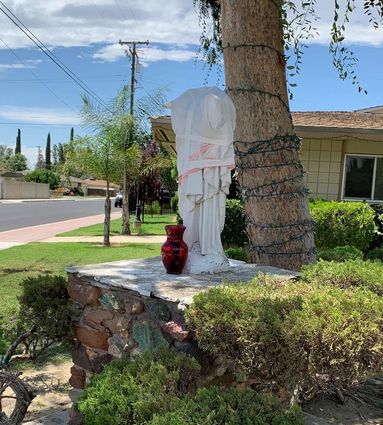 The statue that stood on a pedestal at the side of the church on 9th Place was disfigured after someone removed the head and arms.

"There is no clear evidence as to who did this," Father Raul Sanchez-Flores said. "The church's camera only captured shadows, and the camera across the street was too far away." All Sanchez-Flores could verify was that someone saw a person cross the street but was unsure what weapon they used. He said the incident only took about 20 seconds.

The statue's head and arms were cut off, and the parts were found scattered at the foot of the statue.

"At first I was angry, then I was depressed and now I'm frustrated," said Sanchez-Flores.

On Monday, he noticed "someone had covered the statue with a white shroud."

Sanchez-Flores said he hopes to open the church to regular services in July. "We can only seat about 100 in the church at one time due to the COVID-19 regulations," he said. "Our 5 p.m. Saturday mass and Sunday 10 a.m. mass will both be in English."

He numbered four potential location options if the church is overflowing with parishioners, including the church, the parish hall, the old church and the church school.

"We will have a projector and screen set up in the other locations so everyone can participate in the services," Sanchez-Flores said. "We have been holding virtual masses through Facebook during the quarantine."