Patience pays off for diners 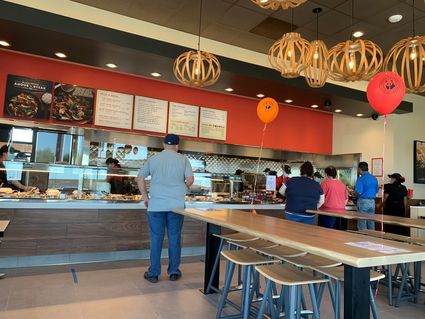 Customers waited in line to place their order or be rung up by the cashier.

It took over four years to open the newest restaurant in Wasco.

Posts were spotted on Facebook last week asking Panda Express would open – not an uncommon questions the couple of years -- and finally, on Saturday , the restaurant saw a line of cars waiting in the drive-thru.

Panda Express' application was brought to the City Council four years ago but several negotiations needed to take place before the restaurant could obtain its desired spot in front of the Walmart Supercenter on Highway 46.

Cars were lined up all the way to the entrance of the Walmart parking lot for most of the day. Drivers were courteous, and patiently waited their turn at the drive-up window. Walk-in traffic was also high because people did not know what to expect and whether guests would be allowed to sit down and enjoy their meal or order and take it out.

The restaurant set up some rules for entrance.

Server Priscilla Raya greeted everyone at the door, stopping those without a mask while apologizing for the inconvenience. Several people were turned away, as anyone who enters the restaurant must wear a mask.

"Inability to dine in or enter without a mask is corporate policy for the time being," General Manager Elizabeth Ramos said.

A line of cars waiting in the drive-thru blocked the entrance to Panda Express.

The restaurant has an extensive menu, but there are some local preferences. "Our most popular item is our Orange Chicken," Ramos said.

Raya has been employed since February of this year. She was hired to open the Wasco restaurant and enjoys working for Panda Express.

Ramos mentioned that Panda Express works with its communities by holding fundraisers and contests for schools and organizations. Panda Express is located at 4800 Highway 46. Pick-up orders can be placed by calling 661-425-9972.