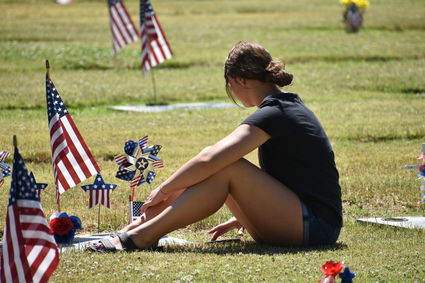 In Shafter, Alicia Pompa sits at the foot of the grave of her grandfather Terry Kelly, who served in the US Army during the Korean War.

With the cancellations of the annual Memorial Day ceremonies that are usually held at cemeteries across the county, Shafter and Wasco still recognized their fallen heroes with American flags on the graves of the veterans who have been laid to rest there.

Memorial Day honors men and women who died while serving in the U.S. military. At the Shafter Memorial Cemetery all of the veterans' graves were adorned with American flags.

Relatives of those veterans were at the cemetery paying their respects, as well as putting flowers, decorations and memorials on the graves, making it a day of reflection and remembrance.

At the Wasco Memorial Cemetery, VFW Post 6742 paid tribute to the veterans buried there.

In addition to the flags, the VFW set up a display that included a wooden cutout of a soldier aiming his rifle, and a couple of signs that displayed the quote, "All Gave Some, and Some Gave All." This quote has been attributed to William Osterkamp, who served in the Army during the Korean War. Osterkamp was wounded in the leg by shrapnel while fighting near the 38th Parallel. Upon being injured, Osterkamp was taken to Army doctors who misdiagnosed his injury. He was sent back to the front lines with his leg broken in two places and stayed there for four months.

The saying points to the soldiers across the nation, all of whom gave some of their selves, while others ultimately gave their all, their very lives, for their country.

VFW members Robert Martinez and Camilo Vasquez were supervising the display for its time at the cemetery, all day Monday. The display also included eight stands at the front of the Veterans Memorial that contained items donated from soldiers and their families. 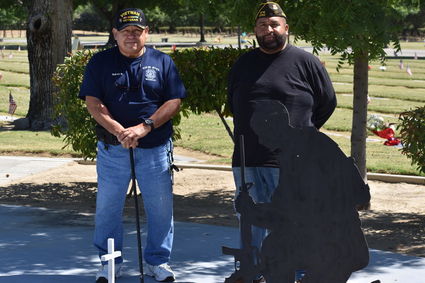 Robert Martinez and Camilo Vasquez of VFW Post 6742 played host for the event.

A weapon was stood up, together with a pair of combat boots and a helmet, as well as the soldiers' dogtags.

The display drew a large number of visitors, while others checked out the display while looking for their relatives' names on the wall of the Veterans Memorial, which includes names of all of the veterans buried in the Wasco Cemetery. One of those searching the wall for names was Rosemary Jimenez, a Shafter resident who has three children whose names are on that wall, Julian, Ruben and Joey Jimenez. "I think this is so nice, with the helmets, boots and ID tags, especially with there not being a ceremony this year," said Jimenez.

For those at the cemetery at the top of the hour, they were also able to see the playing of Taps, "which was very touching," commented Jimenez.